In March of 2015, the World Health Organization’s International Agency for Research on Cancer (IARC) listed the chemical glyphosate–the active ingredient in Roundup–as a ‘probable carcinogen’ (International Agency for Research on Cancer, 2015). Glyphosate is the most widely used pesticide, a common tool for groundskeepers in schools and parks, and aggressively sold to homeowners. Community members across the country have been responding to this new classification and while many are justifiably worried, many are still skeptical. What does the IARC mean by “probable?” Isn’t glyphosate as safe as a tanning bed? 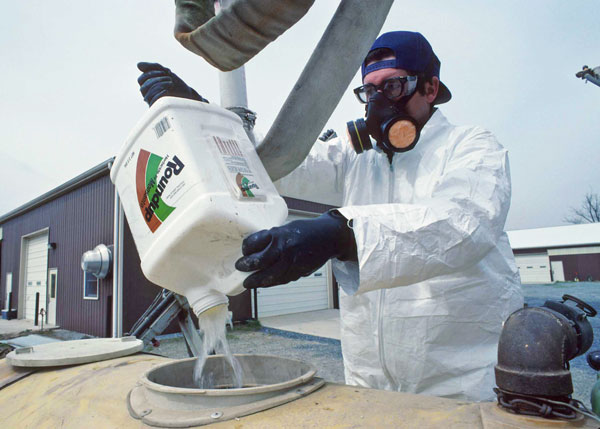 Glyphosate has been found in 75% of rain samples (Deike, 2014). This chemical is in our food, water, air, and has been found in breast milk and urine. The manufacturing, distribution and sale of glyphosate is a multi-billion dollar industry. Since the glyphosate classification, Irvine, California successfully lobbied their schools to ban glyphosate and is working with the city to use organic land care (Morrison, 2016). Activists in Portland, Oregon are asking the same of their Parks Department. What exactly does this classification mean and what data can you share with your city, park grounds crews, school principal or neighbor?

Group 3: Unclassifiable as to carcinogenicity to humans (examples: caffeine and Carbaryl)

Group 4: Probably not carcinogenic to human

Important research on the link between glyphosate and cancer was done by oncologists Dr. Lennart Hardell and Dr. Mikael Eriksson of Sweden and supported by other studies. An overview of the research used for the IARC re-classification was performed and presented by Susan Kegley from Pesticide Research Institute,  and can be accessed here: http://sfenvironment.org/sites/default/files/fliers/files/sfe_th_kegley_sf_ipm_glyphosate_7-2-15.pdf

Hardell and Eriksson published three important studies in 1999, 2002 and 2008. All three were retrospective studies performed in Sweden and were limited by the potential of multiple exposures. The first was considered limited as it had a small number of cases and controls, but the later studies of pooled data had over one thousand cases and controls each. The later research found a statistically significant association between glyphosate exposure with certain cancers and found the risk increased with increased exposure. This research was integral to determining the cancer rating for IARC (Hardell & Eriksson, 1999) (Hardell, Eriksson, & Nordstrom, 2002) (Eriksson, Hardell, Carlberg, & Akerman, 2008).

Other studies found a correlation between glyphosate exposure and non-Hodgkin’s lymphoma using human epidemiological studies. The research found a statistically significant association for people exposed at least 10 days per year, however inclusion of the less exposed subjects resulted in a non-significant effect (McDuffie et al, 2001). Another study looked at control studies of farmers in the Midwest from the 1980s and found statistically significant association of glyphosate exposure with non-Hodgkin’s lymphoma for farmers. This study had a large number of cases and controls (650/1,933) and controlled for exposure to other pesticides (De Roos, et al., 2003).

Some studies have conflicting results. DeRoos and other scientists published a human prospective study in 2005 that looked at pesticide applicators and their spouses in North Carolina and Iowa. They found no correlation between glyphosate exposure and non-Hodgkin’s lymphoma, and non-statistically significant association with multiple myeloma overall.  But results found a correlation for multiple myeloma, a cancer that forms in a type of white blood cells, which was significant for the highest exposure group. This had a very high participation rate with 40,376 using glyphosate vs 13,280 having never used glyphosate (De Roos, et al., 2005).

Animal studies of rats, performed by the registrant, found mixed results. Some found that high dose males had an increase in testicular tumors, an increase in pancreatic islet cell adenomas and an increase in adrenal cortical carcinoma. EPA requested that these studies be repeated, as dosing was not considered high enough. Other studies observed alveolar lung tumors, hepatic tumors, and tumors of the lymphoreticular system but no clear dose-response relationships were noted and the tumor incidence was not statistically significant compared to historical controls.

Based on these studies and others, the IARC determined there was sufficient evidence of cancer in mice and rats that were fed glyphosate over several years. Evidence of carcinogenicity from mechanistic or cellular studies that explain how glyphosate may cause cancer was strong (including in vitro animal and human cells and animal data). However, there was limited evidence of cancer in humans from epidemiologic studies of people, particularly pesticide applicators and farmworkers.

What Others Are Saying

Although the World Health Organization’s working group has reclassified glyphosate, not all organizations and governments are in agreement with this decision. EPA reportedly reviewed epidemiological studies and felt it does not warrant any change in EPA’s cancer classification for glyphosate, but an updated risk assessment is expected this year. EPA’s early assessment rated glyphosate as a Group C, Possible carcinogen. The Office of Pesticide Programs assessment puts glyphosate into Group E or 'evidence of non-carcinogenicity for humans.' However, the State of California has classified glyphosate as 'known to cause cancer.'

In 2015, Health Canada reviewed glyphosate for registration and found the identified hazard was offset by risk of potential for human exposure and they considered it sufficiently low so as not to pose a risk to human health.

According to A Small Dose of Toxicology, written by NCAP Board member and noted toxicologist Steve Gilbert, the dose makes the poison. For a child’s size, the dose–and therefore exposure–is a much higher when compared to an adult’s. Children’s bodies and major organs are still developing. Their behavior and physiology make them more susceptible to exposure. They put things in their mouth and they are closer to the ground where they come in contact with the source of contamination (Kroger, Schettler, & Weiss, 2005) (Kerry & Kroger, 2012). This makes children more susceptible and more vulnerable, even at low doses (Gilbert, 2004).

While the focus has been on the potential cancer causing ability of herbicides, it’s also important to look at other health impacts. Besides cancer, glyphosate has been linked to other health issues including Parkinson’s disease and fatal kidney disease. Herbicides have also been correlated with diabetes and ALS, among other human disease (Montgomery, Kamel, & Sandler, 2008) (Doheny, 2016).

NCAP encourages best practices and long-term policies that include restrictions designed to adapt as the chemical companies adapt. For example, the Oregon IPM in Schools law includes a low-impact pesticide list. Pesticides that are classified as a human carcinogen or probable/likely to be a human carcinogen under EPA guidelines would not be allowed in schools (State of Oregon, 2009). As chemicals are re-classified, children in schools will be protected and activists don’t need to repeat their efforts. We push for long-term change.

While we don’t fully understand the potency of glyphosate, studies indicate individuals exposed to the highest doses are at the greatest risk and children are more susceptible to carcinogens. We are also concerned that a ban on one chemical will lead to schools, parks or cities to depend on a more harmful substitute. We encourage solutions that focus on preventing the use of pesticides and ending reliance of harmful synthetic chemical pesticides.

Another avenue of exposure is through the food we eat. Glyphosate is used most heavily in grain production and genetically modified pesticide-tolerant crops. Glyphosate is a systemic chemical, meaning it is taken up inside of the plants that we eat. More testing is needed to understand how much glyphosate is in our food and how adversely this type of exposure affects the body.

Understanding the process used to re-classify this pesticide, as well as understanding the studies that were used to make this determination is important for advocates and promises ecologically sound policy solutions. And, if you see a post on social media that says glyphosate isn’t any more dangerous than a tanning bed, you’ll be able to think critically about the comparison.