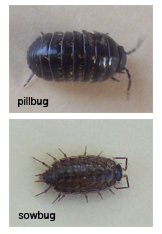 Pillbugs and sowbugs are garden residents that look somewhat like mini-armadillos. Feeding on decaying materials, they can be beneficial recyclers in gardens, but sometimes they become pests when they feed on young shoots and roots, or on fruits and vegetables that lie on damp ground.

Pillbugs and sowbugs have brown to dark gray elongated oval bodies up to 3/4 inch long and seven pairs of legs. Sowbugs have two small tail-like appendages at the rear while the very similar pillbugs, often called roly-polies, can curl up into a ball when threatened. Pillbugs and sowbugs are also called potato bugs or woodlice. For simplicity's sake, "pillbugs" will be used in this article to cover both pillbugs and sowbugs.

Pillbugs are crustaceans related to water dwelling crayfish and shrimp. Although they live on land, pillbugs breathe through gills and must have moisture to survive. They are mostly active at night when humidity levels are higher and temperatures are lower. During the day they hide in damp places under rocks, boards, piles of leaves or grass clippings, mulch, debris, or in cracks and crevices, sometimes clustering together to reduce water loss. They become inactive in cold weather.

Females incubate seven to 200 eggs in a brood pouch on the underside of their bodies. After hatching, miniature white pillbugs continue to develop inside the pouch for six to eight weeks. Upon emerging from the pouch, the young pillbugs — smaller paler versions of adults — are on their own.

Pillbugs help out in the garden by speeding up the breakdown of dead and dying plant matter. They are usually not pests but often get blamed for damage simply because they are a common sight in the garden. For example, they readily feed on produce that has been damaged by disease or other pests.

Occasionally, pillbugs feed on young shoots and roots. They may nibble on fruits or vegetables such as strawberries, melons, and squash that lie directly on or near a damp soil surface. In greenhouses, large numbers of pillbugs can be problematic.

If you have identified pillbugs as the culprits, you can take steps to discourage them and reduce populations.

Pillbugs sometimes make their way inside — generally in basements and on the ground floor. Pillbugs are totally harmless and do no damage indoors, so at worst they are a nuisance. Inside the house , they quickly dry up and die and can be easily vacuumed or swept up.

If you have large numbers of pillbugs indoors, moisture control and exclusion are the best preventive steps. Fix leaks and improve ventilation to reduce moisture. Dehumidifiers and fans can help dry out damp basements.

Prevent entry by caulking and weatherstripping around windows and doors as well as sealing cracks in the foundation and other openings on walls. Install a door sweep that makes good contact with the bottom of the door.

If indoor pillbug populations are still problematic, consider reducing populations around the house. Reduce moisture by directing water away from the house. Trim or prune plants around the house so that there is plenty of air circulation. Remove hiding places near the foundation such as boards, piles of leaves and grass, and other debris. Pillbugs also like to hide in mulch, so you need to weigh the benefit of mulch against the problem of sowbug invasion.

Rumsey, Kay. Eugene, OR: Northwest Center for Alternatives to Pesticides.