Last month our suggested actions included opposing the confirmations of two nominees of concern to our work and priorities: Scott Pruitt for head of the Environmental Protection Agency (EPA) and Sonny Perdue head of United States Department of Agriculture (USDA). 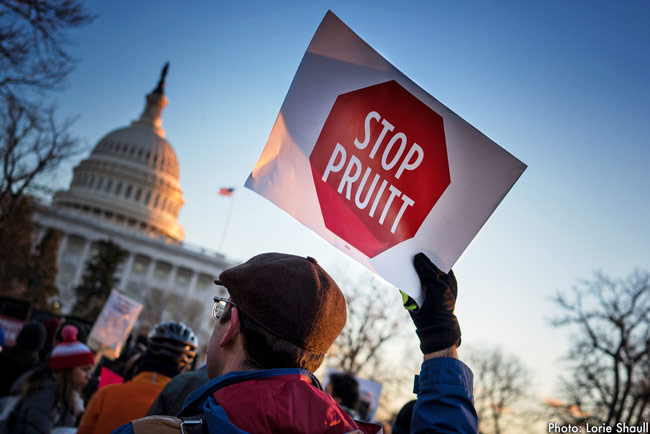 Unfortunately, Scott Pruitt was confirmed as head of EPA on Friday, February 17, 2017. But not before Senate Democrats spent a good bit of their 30 hours of debate putting Pruitt on notice about the importance of keeping the nations’ environmental laws strong. We will need to work diligently to defend and advance good policy to keep our water and air clean, wildlife protected and our communities healthy. Thank you to those of you who called or emailed. You helped put Pruitt on notice about our priorities!

With threats being made by the Trump Administration that chemical regulation, including pesticides, should be handed over to states, some interesting bedfellows are emerging. Historically, the chemical industry has pushed for uniformity so that regulations would be more predictable. Some in the chemical industry are standing up once again for uniformity, saying it is not in the industry’s best interest to have 50 different sets of state regulations.

So it turns out that many parties support having the Environmental Protection Agency in charge of setting at least minimal and uniform regulations for the nation. While we believe the regulatory process for pesticides could be much stronger, having no process, or miring that process in chaos, is not the answer.

Through advocacy we have pushed for, and won, stronger pesticide risk assessment approaches at EPA. This includes the importance of looking at synergistic effects of pesticides and the harm caused to endangered Pacific salmon and steelhead and other endangered or threatened species. We continue to push for more safeguards for our pollinator populations harmed by pesticides both within EPA and at USDA.

Keep the pressure on. Call your two Senators now! The message: Please continue to hold accountable Mr. Pruitt, as head of EPA, and Mr. Perdue, as the top nominee for USDA. Ask them to retain and strengthen sound pesticide policies within the EPA and USDA that help keep people and workers safe, water and air clean, food and farms safe and healthy, and wildlife protected.

Take the Pesticide-Free Pledge and sign up for our newsletter here.

Donate and support our efforts to keep making progress here.