In 2013, the shocking death of an estimated 50,000 bumblebees in the parking lot of a Wilsonville, Oregon shopping center catalyzed a worldwide conversation about bee health and pesticides. The cause? Those bees visited trees treated with pesticides. The incident, with photos of bees littering the asphalt, became national news and was featured on the cover of Time magazine, in the LA Times and in The Huffington Post bringing the previously arcane topic of neonicotinoid insecticides into millions of American households.

Join NCAP in Building Pollinator Habitat in Wilsonville, on Farms and Across the Northwest. 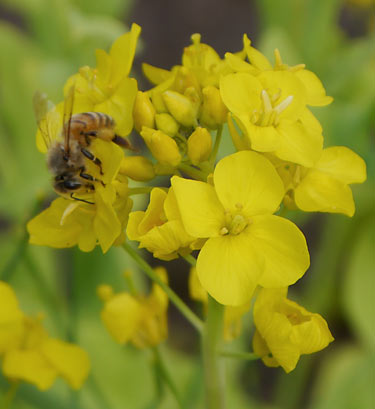 Two years later, The Northwest Center for Alternatives to Pesticides recognizes that this notorious incident uniquely positions the City of Wilsonville and committed partners to exercise national leadership in demonstrating achievable ways to care for pollinators within urban environments. On the eve of National Pollinator Week (June 20-26), NCAP is proud to announce its commitment to leading a new pollinator stewardship project and collaborating to build pollinator habitat in Wilsonville.

According to NCAP’s Healthy Wildlife and Water Program Director, Sharon Selvaggio, “The Bee Stewards Project is an opportunity to reverse the effects of this tragedy, in part, by increasing pollinator habitat on public and private lands within the City of Wilsonville.” The project will also promote community and environmental health through producing an Integrated Pest Management (IPM) Plan, which will promote alternative methods to address pests on City property and it will also educate community members and local students about pollinators, their critical services and their conservation needs.

Thanks to YOU, this project implemented five main goals:

Providing Alternatives to Pesticides and Creating Valuable Pollinator Habitat are at the Core of NCAP’s Efforts.

NCAP would like to thank everyone who supports pollinator protection and education as well as this project’s working partners, including The City of Wilsonville, The West Linn Wilsonville School District, Xerces Society, Habitat Landscape Design, Friends of Trees, and Northwest Youth Corps (NWYC).

For over 40 years NCAP has effectively partnered with and mobilized a diverse set of individuals, communities, groups, universities, policy makers, government agencies, and businesses toward the goal of advancing alternatives and reducing the use of pesticides.  NCAP works in both urban and rural areas to promote practical, well-researched and environmentally friendly strategies for managing pest problems and reducing pesticide use and exposures.

NCAP’s emphasis on community and environmental health and safety focuses on vulnerable populations such as children, pregnant women, and endangered fish and wildlife.  NCAP has a strong history of working with others, including municipalities and parks districts, to develop and implement integrated pest management strategies and plans.

Why Your Support for NCAP and Pollinators is Important:

Your Support is Critical to Our Success.
Join Our Work to Protect Pollinators, Build Habitat and Reduce the Use of Pesticides by Becoming a Member Today!