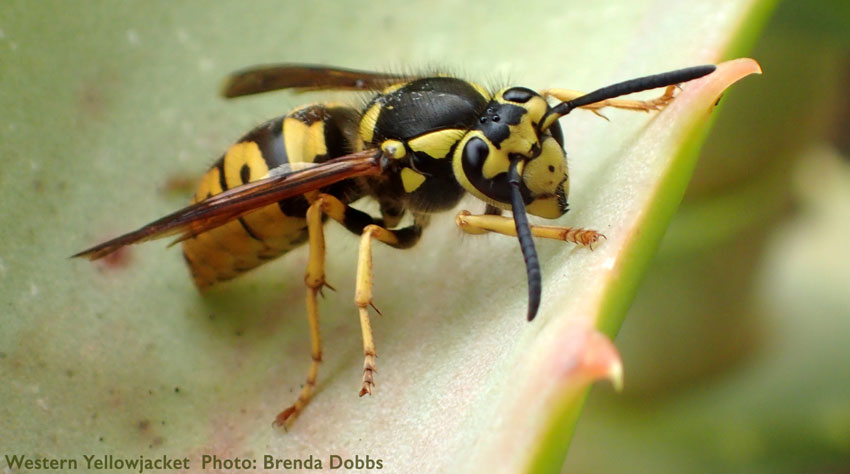 It’s hard to like yellowjackets. They sting, cause violent allergic reactions in some people, harass picnickers, and have a knack for causing trouble at the wrong time. They seem persistent, clever, and difficult to manage. This doesn’t mean, however, that reaching for a spray can is a good way to deal with a yellowjacket problem. Chemical-free techniques are surprisingly effective.

What Is a Yellowjacket?

Yellowjackets, sometimes known as hornets, are wasps that are black and yellow or white. Common pest species in the Northwest are the western yellowjacket, the common yellowjacket, and the German yellowjacket. A wasp that is commonly mistaken for a yellowjacket is the paper wasp. They are longer and more slender than yellowjackets and are usually unaggressive (see Bees & Wasps). Their nests are a single comb, and not surrounded by a paper envelope.

All yellowjackets build paper nests that are completely surrounded by a paper envelope. Most yellowjackets nest underground. They often use burrows made by rodents or other natural openings as nest sites. The German yellowjacket likes to nest inside walls of houses. There are two kinds of yellowjackets, the aerial yellowjacket and the bald-faced hornet, that hang their nests from trees or building eaves.

Most yellowjackets defend their nest vigorously, and being near a nest means you’re likely to get stung. Typically, the ground-dwelling yellowjackets are the most aggressive, while those that nest above ground are somewhat less touchy.

Yellowjackets feed their young large numbers of insects that might otherwise damage trees or crops. They also feed their young houseflies, lots of them.  What this means, according to the University of California, is that they “should be protected and encouraged to nest in areas of little human or animal activity.” If you find yellowjackets in a place where people and pets are unlikely to get close, it’s a good idea to just let them be.

Prevention is the best solution. If you’re expecting yellowjacket problems, there are some simple steps you can take to reduce or eliminate them.

Traps can be an effective, pesticide-free technique for managing yellowjackets. Trapping experts have some tips for making this technique work well:

Removing a nest is a chore that should be tackled only by professionals with expertise in working around stinging insects and protective clothing. Aerial nests can be removed at night by enclosing them in a plastic bag and  pulling them loose. Other kinds of nests can be vacuumed out. Some companies provide this service inexpensively because they sell the wasps as a source of venom to pharmaceutical companies. Check out Bee Removal Source for an extensive list of resources organized by state.

If You Think Pesticides are Necessary

NCAP does not recommend the use of pesticides. However, we recognize that you may feel that you have no other options. If you feel that yellowjacket pesticides are necessary, consider using one of the products that the U.S. Environmental Protection Agency has classified as minimum risk pesticides.

For examples: http://www.saferbrand.com/ or http://www.ecosmart.com.  These “minimum risk” products do not have a registration number and identify all ingredients on the labels of the products.

Although they are useful insects, yellowjackets can also be a painful pest.  You can solve your yellowjacket problems without pesticides by reducing attractive food or drink and trapping when necessary.