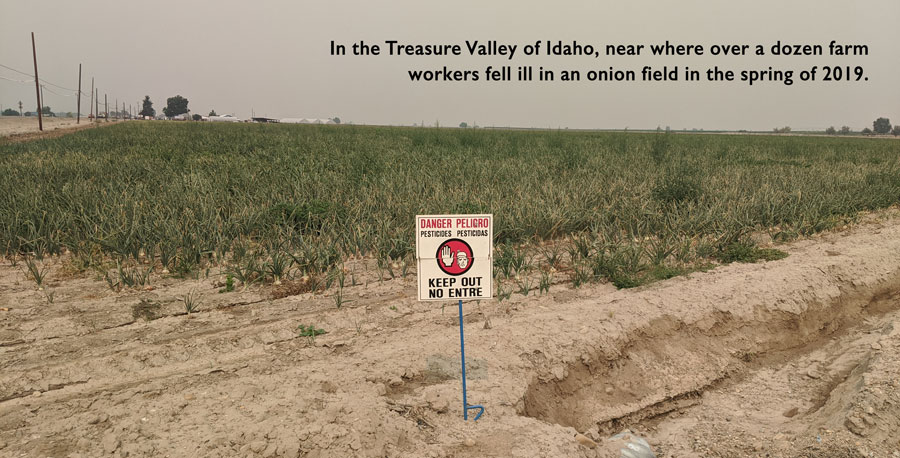 Thank you for your interest. The comment period is closed.

The Idaho State Department of Agriculture (ISDA) is taking public comments until October 7th at 5 p.m. on proposed rules that we support in part, but that also roll back some pesticide protections. Tell them you want stronger language to protect hazard areas – including schools, hospitals and rural towns – from the most harmful pesticides. Thank you to the 100+ Idahoans who have already submitted comments!

During the open comment period it’s important that as many Idahoans as possible show the ISDA that we care about protecting the most vulnerable among us, because then we are all safer. NCAP supports ISDA in taking steps to add a definition of pesticide drift, expand the definition of hazard areas to include schools and hospitals and retain wind speed restriction language for applications. However, we are advocating that language be reinserted to protect hazard areas from the most toxic pesticides, not just phenoxy herbicides.

HOW TO SUBMIT COMMENTS

Please email your comments (in any language) during the open comment period to: [email protected]

CLICK HERE TO HAVE AN EMAIL AUTO-POPULATED FOR YOU TO ADD TO AND SUBMIT - BE SURE TO SIGN THE EMAIL AND ADD TEXT FROM BELOW (OR YOUR OWN WORDS) TO THE MESSAGE!

Thank you for this opportunity to submit comments on the proposed rule 02.03.03 – RULES GOVERNING PESTICIDE AND CHEMIGATION USE AND APPLICATION

I support ISDA in taking steps to expand the definition of hazard areas to protect Idahoans from highly hazardous pesticides. However, the rule must expressly protect hazard areas from highly toxic pesticides, which is not currently the case. I strongly believe language should be added to include protections for schools, hospitals, towns and cities from pesticides linked to neurological and developmental diseases, cancer and early death. Specifically, hazard areas should be protected from the class of organophosphate pesticides and paraquat. I believe this because:

In addition to the language changes in the rule, I support:

(Additionally, using your personal story, you can add why it is so important to you that Idaho protect schools, hospitals and rural towns from harmful pesticides and provide the strongest possible protections for farmworkers in the future.)

Alternatively, you can mail your comments to:

See the full 2020 Pesticide Proposed Rule and a full list of comments from the previous two rounds of comments and public meetings.

Many thanks to the Idaho Organization of Resource Councils, especially their chapter Vizíon 2C Resource Council, and the Idaho Conservation League for their efforts to uphold protections during the rule making.