In Washington State, workers and residents are asking for stronger protections from pesticide drift. According to the Department of Health, cases of pesticide related illness are being reported by farmworkers, residents living near farms, and recently a school[i]. (Details in the pie chart below). Farmworkers on conventional farms have an increased risk of diabetes[ii]and certain cancers, and children of mothers who live near agricultural areas, or who are otherwise exposed to certain pesticides during gestation may be a increased risk for neurodevelopmental disorders[iii]. 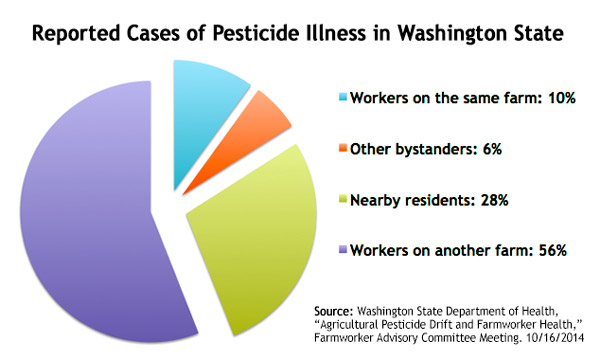 As members of Washington’s farmworker coalition, NCAP is asking for support for House Bill 2392, which addresses the acute and chronic health problems from pesticide drift. This Washington State bill modernized the notification system for workers and residents on adjacent properties. Notification is important because it gives time for workers to move from an area, beekeepers to move their hives, and for schools to move kids in from recess.

In addition, the bill increases transparency and asks that applicators keep a record of the chemicals used, when they were used and where and to submit them to the Department of Health for data collection and analysis. Notification and chemical use reporting are essential tools to protecting people and providing urgent medical care.

Chemical pesticides drift onto unintended targets and can leach into groundwater, contaminating it. Drift can be caused by improper applications, equipment problems or weather changes, and some studies have shown that all blast applications include some drift. The 2002 Washington Aerial Drift study found, “spray drift occurring despite adherence to general precautionary pesticide application guidelines.[iv]” 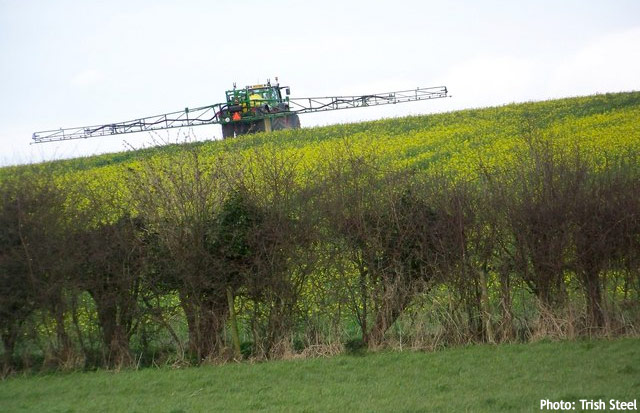 Drift is indiscriminate and has resulted in acute health injuries, economic impacts and other negative impacts in Washington. In the last 5 years, there has been an increase in acute illness cases in Washington’s agriculture fields.

In an April 2014 drift event studied by the U.S. Centers for Disease Control and Prevention (CDC), 20 exposed farm workers became ill, exhibiting neurologic, gastrointestinal, ocular, and respiratory symptoms. 75% had symptoms that lasted at least two weeks.[v] However, based on focus group studies by DOH, many workers shared they don’t report inadvertent spraying out of fear of retaliation, and that they don’t seek medical help for financial reasons[vi].

Updated worker protections standards offer protections from drift and requirements for emergency responses to exposure and spills, however these new protections do not extend to neighboring farms or adjacent properties.[vii]

In March of 2015, a school campus in Grant County, Washington reported strong odor and drift from a neighboring field and emergency services were called [viii]. An air-blast pesticide application to an apple orchard drifted onto nearby grounds, which included sport fields, tennis courts, school district offices, a high school, a middle school and two elementary schools [ix]. Information about scheduled pesticide application is critical to preventing harmful exposure.

What the bill would do

Department of Health and stakeholders will develop a form to notify neighbors of pesticide applications that will occur using drift-prone methods (aerial or airblast). The development will include a review of potential means of notice, including in-person, by phone, or electronically.  Neighboring properties would include schools, residents, or businesses. The Department will help to implement the communications project and evaluate its success.

Department of Health and public health professionals will develop an information-sharing system modeled on California’s Pesticide Use Reporting System. The system will make data easily accessible to the public through a searchable, sortable, web-based database. Information gathered will include all information currently required by law to be reported.

Support this important change to improve transparency and accountability.

Action Needed: If You Live in Washington, Email Your Representative and Ask Them to Support HB 2392!

Please support HB 2392 to address the increasing risk of pesticide exposure to farmworkers, and adjacent properties-including schools, our community and the environment.

Suggested Comment Language, personalize with your own experiences and thoughts:

Support HB 2392 to protect neighbors and promote a healthy Washington. Current regulation of chemical toxicants is ineffective; the State can reduce hazardous exposure from pesticides.

Pesticides can drift from their intended target, which threatens schools, residences and workers. In 2014 in Washington, 124 people got sick from pesticide drift and 102 (82%) of these individuals were exposed on neighboring property.

This bill would support the Department of Health in their efforts to collate data of information already required by law, providing transparency and accountability.

Chemicals in the US are inadequately tested and prevention from harm should be a high priority. Pesticides are linked to negative impacts on community health, acute health problems for farm workers and complications for children exposed during development. In addition, direct pesticide applications and drift impact wildlife, water quality and habitat.

Thank you for your attention on this issue.