Summer is here and so are the yellowjackets! This guest post was written by NCAP supporter Aaron Walton. Aaron shares tips from his experience managing yellowjackets on his 2.5 acre property near Eugene, Oregon. 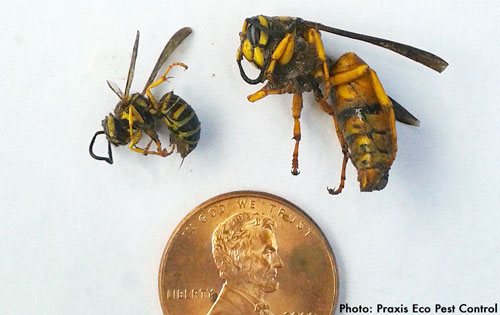 (Demonstrating the size difference between the smaller worker and the large queen. Notice she lacks a stinger, possessing an egg-laying ovipositer instead.)

This article is written primarily about ground-nesting yellowjackets as they occur in western Oregon. While these techniques can be relevant to yellowjackets in other areas, it is important to consider your location before attempting to destroy a nest. In warm climates, yellowjacket nests may not die out in the winter, and the nests can grow to be very large with tens of thousands of yellowjackets. These large nests should not be disturbed, and professionals should be called if removal is necessary.

Before we get started, let's go over a few important safety issues. Yellowjackets are aggressive, especially when their nest is being disturbed, so it is important to keep the following in mind:

1. Always perform yellowjacket control at night! Yellowjackets have poor night vision and generally stay in the nest at night. Larger, late-season nests may have a few sentries posted at the opening to the nest, so approach the nest with caution.

2. Use a light source that can be turned off quickly in case the yellowjackets swarm out of the nest.

3. Keep the area around the nest clear of pets, children or anything that might slow you down if you need to make a quick escape. Avoiding an angry swarm of yellowjackets is easy at night if you take a few, basic precautions.

The general life cycle of a yellowjacket nest begins and ends with the queens. Each nest is created by a single queen, and at the end of the season, many new queens exit the nest and find a spot to hibernate for the winter.

Your best chance to kill an entire nest is in the spring when the queen has left hibernation and is establishing a new nest. Even after the nest is established, the queen will continue to leave the nest until a new batch of workers is mature enough to take over the job. If you kill the queen, the entire nest will die out.

Putting yellowjacket traps out in the spring is a worthwhile activity (see tips here), although in my experience the queens are not as attracted as the workers to the bait in the traps. However, even if you only manage to trap a few queens you have eliminated a few nests that you won't have to deal with later. A better option than trapping queens is having a can of non-toxic, botanical oil spray handy at all times to take out the queens quickly when they appear. (Aaron recommends Rescue W-H-Y: Wasp, Hornet, Yellowjacket Spray. NCAP does not endorse specific products, but we do advocate for the use of an oil-based spray rather than a synthetic insecticide.) Queens are not shy, and they often end up in the garage or buzzing around areas where projects are happening. If you have some spray handy you can probably eliminate a lot of future nest problems. I keep several cans around in strategic spots, so I always have one close by when the queens show up.

Destroying a nest early in the wasp season is very important. If you notice a nest in May or June, attempt to destroy it as soon as possible. If you wait because you don't think it's a big deal, you are going to have a much more difficult problem when the nest peaks in August or September. Late summer nests are much more difficult and dangerous to remove than early season nests.

When Will Yellowjacket Nests Die Out On Their Own?

Many sources claim that most yellowjacket nests die out after the first frost of the season in the fall. I have found that this is completely untrue in western Oregon. In 2015, a very bad yellowjacket year where we had at least eight ground nests on our property, most of the nests survived several frosts. A few of the nests even survived a Thanksgiving cold snap with several consecutive days of sub-freezing weather. It wasn't until another period of freezing weather in December that the new batch of queens swarmed out of the final few nests, signaling the end of the colonies. In contrast to 2015, October of 2016 gave us a record 10 inches of rain (the average is around three inches for October), and yellowjacket activity stopped completely by the end of the month. My conclusion from these observations is that yellowjacket nests are affected by a variety of environmental factors, and frost is not necessarily the leading cause of nest abandonment.

Will Nests Be Reused By Yellowjackets During Consecutive Years?

Nests are not reused by yellowjackets, so there is no reason to destroy them once they have been abandoned. One late fall day I was staring at the entrance of a nest to see if it was still occupied and a shrew popped out of the hole with a dead yellowjacket in its mouth. Once the wasps in a nest have died out, nature steps up to ensure that the nest will not be viable for a future colony.

Yellowjackets can often be controlled through non-toxic means, but before attempting to destroy a nest it is important to think about safety. It is also helpful to know the basics of the yellowjacket life cycle, so that you understand when you can trap or kill the queens, when the nests reach peak size and when they might die out on their own. A couple of years ago I had a project on hold due to a large nest in the creek bank adjacent to the project site. It was critical that this project be completed before winter set in. Based on information I found online, I was going to wait until the first frost killed the nest, and then hurry to complete the project before winter rain sidelined the job. I was alarmed to find that the first frost did not eliminate the nest, and I found myself in a bad situation. If I had had a better understanding of the nest life cycle, I would have known that the nest needed to be removed earlier in the year, so that the project could have been completed on time (the conclusion to that situation was that I had to do the project at night in all kinds of bad weather, being very careful to not disturb the nest.)

In the next installment I cover some non-toxic nest removal methods: Natural Yellowjacket Control Methods Part 2: Nest Removal–The Good, The Bad and the Silly.

For professional help, a database of removal experts can be found here.