Natural Yellowjacket Control Part 2: The Good, The Bad and the Silly

Summer is waning and with food sources becoming scarce, yellowjackets are aggressive. Late summer is an especially good time to trap hungry yellowjackets bothering your outdoor activities (read about traps here). But to really stop the angry buzz, removing the nest is key. This guest post was written by NCAP supporter Aaron Walton. Aaron shares tips from his experience managing yellowjackets on his 2.5 acre property near Eugene, Oregon.

NCAP recommends using a professional nest removal service to avoid getting stung. However, if you plan to take on a nest yourself, see Aaron's tips below for methods he has tested. 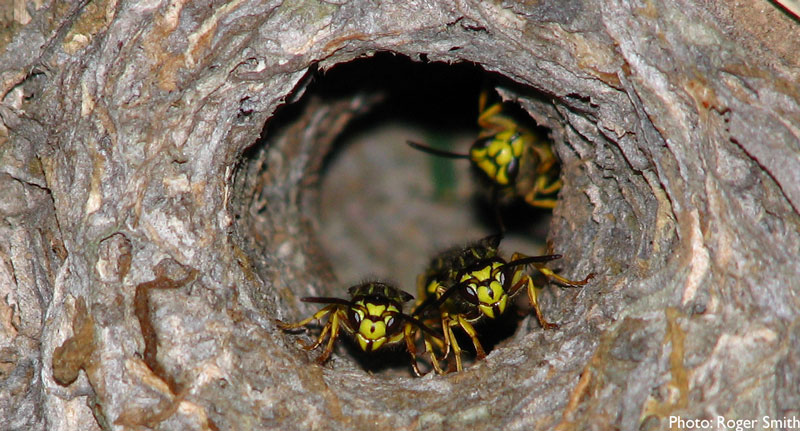 The internet is full of DIY "tricks" for quickly and easily destroying yellowjacket nests. But do they work? I have tested most of these methods and address the most popular ones in this article.

This guide is intended to address the removal of yellowjacket nests that are underground. It does not address cavity nests in buildings or other structures. Working around yellowjacket nests can be dangerous, so it is important to understand and follow all safety precautions. (See Part 1 for safety information.) Several of these methods are used by professionals, so this information can also be useful in selecting a nest removal company.

Method: Hot or Soapy Water
Does it work? Maybe

The most commonly cited nest removal method on the internet is the use of water. Some recommend injecting liquid soap into the nest with the water and others say you should use boiling water. Whether or not these methods work depends almost entirely on the position of the nest. If the nest is relatively small and positioned close to the surface of the ground then there is a chance that you will destroy enough of the nest to kill the queen – which is the ultimate objective. However, if the nest was built in a mole tunnel or something similar, you can pump water into the hole all day and likely won't accomplish anything.

From my experience, water-based methods are usually a waste of time. I did have one situation where the nest entrance was up against the concrete foundation of the garage, and I surmised that the nest must be directly under the entrance hole as the foundation would not allow much horizontal expansion of the nest cavity. This theory proved to be correct and I was able to kill the nest with a pan full of hot water. This is the only time this method has worked for me. Since this technique is generally quick and easy without any cost, it can't hurt to try pouring hot water into a nest. Do so at night with proper safety precautions. You might just get lucky.

Method: Diatomaceous Earth
Does it work? No

Diatomaceous Earth is a white powder made of the fossilized remains of marine phytoplankton. DE is known to be a natural repellent of many kinds of pest insects. While it is true that yellowjackets do not like to come into contact with DE, you are never going to kill an entire nest with it. I have experimented with filling nest entrances with DE and eventually the wasps will dig out of it and carry on with their business.

Method: Glass Bowl
Does it work? No 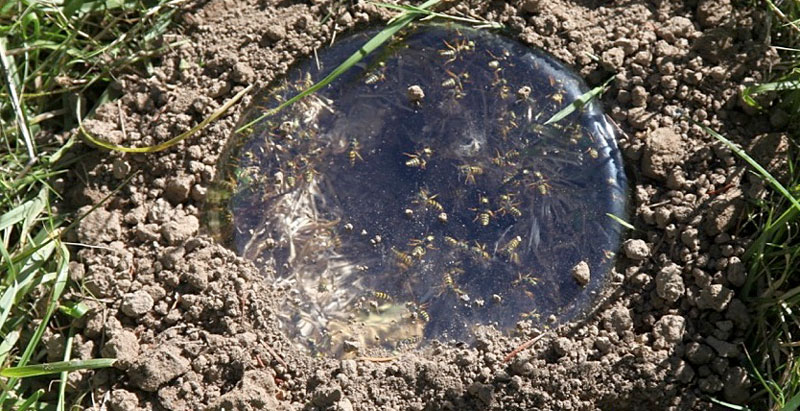 Many posts and articles on the internet claim that putting a glass bowl over the nest entrance will cause the yellowjackets to become trapped and the nest will die out in a few days. One article I recently read insisted that this method works and that the yellowjackets will not attempt to dig out around the bowl blocking the entrance. I tested this method several times, even going as far as sealing the edges of the bowl with a thick layer of diatomaceous earth to further discourage escape. The result was always the same: even though the yellowjackets initially showed signs of being trapped, they always eventually dig out. This method has another problem associated with it. If you encourage the wasps to dig new exits, you lose the advantage of having a single control point for the nest. It is very advantageous to be able to put a rock or stick in the nest entrance at night if you need to work next to the nest or prepare for nest removal. You lose this option if the wasps have dug several exits.

I wasted a lot of time with the methods listed above before I settled on the method that works nearly every time: manual removal or destruction of the entire nest. This option only works if the nest is in soft enough ground to be pierced with a garden pick. The downside of this method is that it is physically difficult and could be potentially dangerous if one does not work safely around the nest. Manual removal is performed with a garden pick and a can of natural, non-toxic, wasp spray (like this one) in these steps:

If at any time wasps escape from the hole without getting sprayed, simply turn your light off and walk away. You can resume the operation the next night.

This technique sometimes requires a second round of work on a subsequent night if the queen was not eliminated. The wasps will rebuild nearby if the queen is still alive, so carefully inspect the area the next day. Even if the queen is killed, some remaining workers will likely be buzzing around the nest site the next day but they will usually disperse within the first 24 hours if the queen is dead.

Most professional nest removal services that don't use synthetic pesticides use a vacuum and manual removal method. This method is similar to the manual method described above, except that a shop vacuum or other suction device is used to eliminate most of the yellowjackets from the nest before digging it up. Note that the vacuum portion of this process is generally done in daylight, so take extra care working around the nest (professionals wear beekeeping suits). Run the shop vacuum for a couple of hours with the hose positioned right next to the entrance to the nest. The nest will be agitated the entire time and the workers will swarm out and be captured by the vacuum. Unplug the vacuum and let the nest settle down for several hours before proceeding with the manual removal as described above.

Unfortunately most quick and easy wasp nest removal methods described on the internet do not work. There are probably instances where each of these methods has worked in rare conditions: small nests, shallow nests, nests in some kind of ground cavity that prohibits digging a new entrance (crack in concrete or something similar), or nests situated in a way that makes them particularly prone to water damage. However, in most cases manual removal is likely going to be the solution. While manual removal may sound dangerous, following basic safety precautions and working at night mitigates most risks. I have been stung by wasps many times in general, but never even once while performing a nest removal. Safe and effective yellowjacket nest removal is certainly possible without toxic chemicals.