Are you intimidated by the small but menacing-looking earwig? Despite their ferocious appearance and old myths (about crawling in your ear and burrowing into your brain), earwigs are mostly harmless to humans. They can even be beneficial in some cases, feeding on other pests that harm your plants such as aphids and insect eggs.

3 Steps to Manage Earwigs in the Garden

Managing earwig populations is an easy three-step process. First, figure out who is actually the pest. Second, eliminate the conditions or environment that earwigs like best, especially in preferred areas like your new bed of lettuce seedlings. And third, reduce populations through an active trapping program.

If you find that you have excessive damage on your plants, go look for the culprit. If you see slime on the plant or surrounding ground it could be snails or slugs eating your plants. Caterpillars may leave poop, pupae or webbing. To be certain who is actually feeding on your plants, go out at night with a flashlight. You can use traps to monitor earwig populations and trap some, but that does not necessarily mean they are the culprits.1 Earwigs can be present in large numbers and not be causing much damage.2

Altering the habitat around your garden will reduce earwig damage, if they are the main culprit. Here are some tips:

Trapping is an effective, easy and low-tech way to reduce earwig populations. Here are effective traps that you can make from common items:

Just before dark, place numerous of traps on the ground around the garden or under shrubbery or ground cover. In the morning, when earwigs go into hiding, shake them out the traps over a pail of soapy water (except the low-sided traps which can just be emptied in the compost pile if the earwigs are dead).1 Keep trapping until you don't catch any more earwigs.1 You can also create your own trap, just keep in mind that earwigs prefer moist, tight, dark places.

Managing Earwigs in the Home

Earwigs also show up in homes, either brought in on produce, garden materials or entering on their own through cracks and crevices in the building. Inside, they are a harmless nuisance.1 They don't breed indoors, so a continuing problem suggests that they are getting in from outside.6 Here are a few tips for eliminating earwigs in your home:

There are approximately 22 earwig species in the United States.3 In the western and northern regions of the United States, the primary pest species is the European earwig (Forficula auricularia),1,3,7 which was introduced into North America in the early 1900s.1

Earwigs are easily recognized the pair of pincers- also called forceps or cerci ("sir-see")- at the tail end of the body.1,3 Male earwigs have curved pincers while the female pincers are smaller and straighter. Besides pinching in defense and to capture prey, the pincers are used to probe crevices,4 and fold and unfold wings.2,4

The adult European earwig is somewhat flat, reddish brown, and ranges from 1/2 to 3/4 inch long.6,7 Earwigs have two sets of wings, but they rarely fly.1,4 The top pair or wings are short and tough. Tucked under these are longer membranous wings.4,7 Young earwigs resemble their parents but are smaller, lighter in color, and lack wings.1 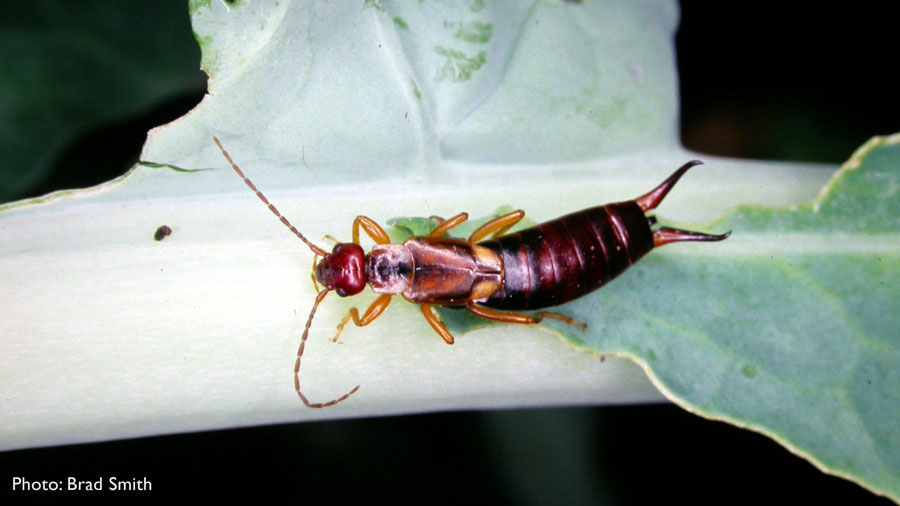 In the fall, male and female earwig pairs dig into the soil and hibernate. Sometime between fall and spring the female lays between 20-50 round, white eggs in cells dug in the upper few inches of the soil.4,7 Small white nymphs hatch from the eggs.1

It's unusual for insects to nurture their young, but female earwigs take care of the eggs and young offspring.1,6 Females will move, lick and rotate the eggs. They also bring food to the young nymphs6 and use their pincers to protect them from predators.2,4 Young earwigs go through 4-5 nymph stages before becoming adults.3

Earwigs usually feed at night and hide during the day seeking moist, dark places such as dense growth of plants, flower pots, boards, mulch, and even in fruit damaged by other pests.1,3

Earwigs are omnivores, eating a variety of dead and living organisms. Earwigs can be beneficial because they feed voraciously on aphids and insect eggs.1 They will also eat mites and fleas.6

Unfortunately, they can sometimes devastate seedlings and annual flowers and seriously damage soft fruit and sweet corn.1 Older plants can tolerate some munching.1,6

Some of their favorite garden foods include:1,3,6

On leaves, earwig make many small, irregular holes that give the leaf a ragged appearance- not unlike damage caused by slugs and caterpillars.6 In soft fruit, look for shallow gouges or deep holes.1,7

As you head into your garden, armed with every trap we've described here, remember that earwigs serve a critical function not only in the larger ecosystem but in your garden as well, even if they do look scary. Protect your vulnerable plants, reduce earwig populations and habitat where you need to, but leave some earwigs to eat up insects, as well as to feed the birds and other critters.1