NCAP devotes time as a staff on a monthly basis to explore equity topics to encourage both personal and organizational growth. Materials are shared before each discussion to provide a common place to connect. Recently, we explored the topic of land—the physical space on which we reside and advocate for healthier pest management practices. We prepared by reading the article Who’s Land is it Anyway?,1 which explores the Land Back movement. The discussion was expansive, including exploration of voluntary land taxes to tribes and how a lack of diversity in farm ownership is rooted in theft of indigenous land.

Family wealth and stability in the United States can be traced back time and again to land given by the government to incentivize settlement. The most notable federal land grant program was the Homestead Act of 1862,2 which ran until 1934 and resulted in 270 million acres of western land being transferred to 1.5 million individuals in 160-acre parcels. Roughly 30% of Americans are descendants of homesteaders.3 The vast majority of recipients were white. A year after the emancipation proclamation was signed, the Southern Homestead Act was created to grant land to former slaves,4 but actually resulted in 28,000 individuals receiving land, of which only around 5,500 were Black. Not only did these programs sequester prosperity in the descendants of white settlers, the Land-Grant College Act of 1862 granted 30,000 acres to each state for the creation of land-grant universities5 tasked with supporting the agricultural endeavors of those settlers.

Parity in access to these government programs did not exist for non-whites. These programs were only open to citizens, and Native Americans born in the U.S. were not granted citizenship by Congress until 1924.6 Early immigration laws also prevented people from certain countries of origin. Chinese women were barred from immigrating in 1875, and the Chinese Exclusion Act of 18827 prevented any immigration from China—it was extended in 1892, made permanent in 1902, and on the books until 1943. This is just a sampling of federal policies that baked racism into the structure of this country. State level land grants further concentrated agricultural land in the hands of white settlers.

As more white Americans actively pursue allyship roles in BIPOC-led movements, it is crucial that we educate ourselves about systemic racism and understand why our presence may not always be welcome. It is undeniable that these policies were shaped by pervasive cultural norms rooted in white supremacy that persist today. At a personal level, both myself and NCAP Executive Director Ashley Chesser acknowledge that our families' stability and privilege are tied to white supremacy and this history of granting stolen indigenous land to white settlers.

Growing up, all I remember being told about how my family came to farm in Idaho was that my grandparents traded their farm in Wisconsin for a farm in Idaho. Recently, I've learned it was more complicated than that. My great grandfather farmed in Oklahoma, and that land played an important role in the farming career of my grandfather and his brother. In the 1970s, my grandfather and his brother decided to trade their families’ land in Oklahoma for over a hundred acres in Idaho. They all moved further west together. Although I haven't been able to confirm that my family received land in Oklahoma through the Homestead Act, during a recent conversation with my father he had a recollection that the Oklahoma farm “was large, perhaps around 160 acres”.

The timing lines up and I have a hard time concluding that they bought the farm in Oklahoma when land was being given away to white farmers like them. My great grandfather or his parents could have participated in the Oklahoma Land Rush of 1889. This was the first of many land runs following the federally approved Indian Appropriations Act of 1951,8 which bankrolled the US military to establish the reservation system. As a likely beneficiary of these policies, I am resolved to neither forget nor to wallow in shame or inaction, but rather to deepen my understanding and commitment to exploring ways to do right by history. 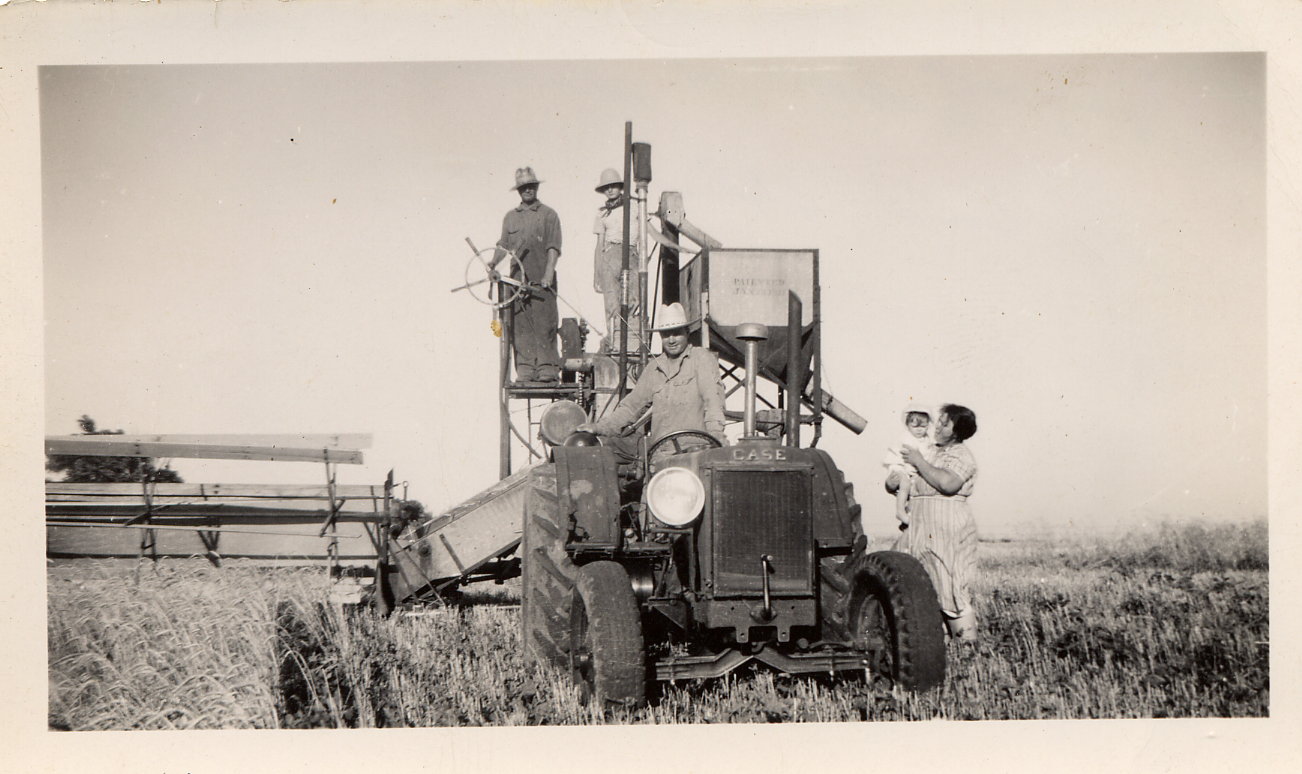 In July of last year the Supreme Court ruled in favor of the Muscogee Nation in McGirt v. Oklahoma,9 finding that the original land treaty, which hadn’t been recognized in some time, was still legally binding. The Cherokee, Choctaw, Chickasaw, and Seminole have similar cases to make, which if won would see land my family farmed in the Sand Hills under Tribal jurisdiction. My family was given and sold land that likely was under treaty, benefitting my grandparent's retirement and my family’s long term financial security. Although recognizing how my family benefited economically is important, we also benefited socially from being part of the dominant culture.

When the cast iron bell rang, we knew it was time to come home for supper. A day of exploring treetops and creek beds had come to a close. I grew up on a small farm surrounded by forest land. Summer days were spent with my brother traversing the property, building forts in trees, feeding apples to the cows and climbing the hay bales in the barn. I cherish the memories of my wild adventures. 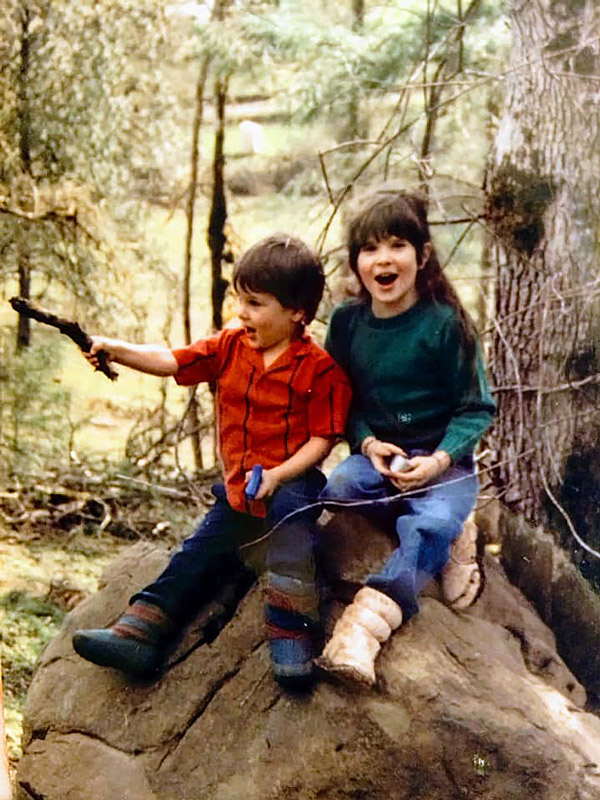 Ashley and her brother as children, playing on the land where they grew up

I remember hearing stories of my great grandfather journeying with his family across the country from Illinois to Oregon when he was 14 to start a new life. After moving several times, they eventually bought 640 acres of land from an original land grant owner outside of Eugene, Oregon and started farming. We lived with my great grandfather in the farmhouse that he built with his father.

Today, several generations of my family still live on pieces of that original 640 acres. Goats now graze the fields instead of cows, and my children play on the same land where I grew up when they visit their grandparents.

But today, my cherished childhood memories sit in my heart next to some troubling knowledge. I know now that my idyllic childhood was possible because of a history of genocide and racism. The Oregon Donation Land Act of 1850 gave land stolen from native peoples to “white male citizens and their wives.”10 Further, Oregon’s constitution, adopted in 1857, explicitly excluded Blacks from settling here: No free negro or mulatto, not residing in this State at the time of the adoption of this constitution, shall ever come, reside or be within this State.

Oregon’s Black exclusion policy was repealed in 1926. Although the impact of both the laws and racist sentiments are still seen today, that hasn’t stopped farms like Mudbone11 from taking up the meaningful work of growing food for people. My family’s story illustrates how land wealth has been sold and passed down almost exclusively by white colonizers and why it is so important to pass new policies that support farmers of color. One current example is The Emergency Relief for Farmers of Color Act championed by Senator Raphael Warnock, the first Black chairman of the Senate Agriculture Committee.

Racial disparities in access to land and the ubiquitous use of synthetic pesticides both have roots in the same cultural norms like Manifest Destiny12 that justified giving away stolen land to white settlers. The food and farming system upon which most rely today was built on those same cultural norms, and has all but overshadowed the ways indigenous communities created and thrived on this land before colonization. It is necessary to build a wide understanding of how early land policies exacerbate racial disparities in intergenerational wealth. Descendants of settlers who benefited from these policies have two options. They can either ignore how they have benefitted socio-economically from these policies, or they can join in the endeavor of questioning and reshaping the cultural norms that allowed these policies to be approved in the first place.