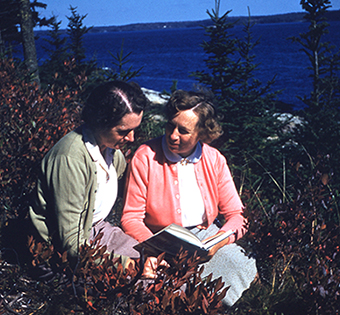 The movement’s silence about the other part of her life

Today is the 60th anniversary of Rachel Carson's 1962 book Silent Spring, a sobering exposé about chemical pesticides' assault on nature. Its publication eventually forced the banning of DDT and helped catalyze the modern environmental movement as well as challenging our civilization's narrow views of nature and humans' blindness to our interconnected ecosystem.

Our thinking evolved, as did our understanding of the contaminating effects that chemical pesticides have on our environment. We now know they never really leave our natural systems, but seep into the fabric of life that nature supports; and humans are just as vulnerable and permeable to their toxic effects as the bees and butterflies.

Silent Spring also inspired other anthems, even influencing art and pop culture. From Joni Mitchell lyrics: "Hey farmer farmer – / Put away the DDT / Give me spots on my apples, / but leave me the birds and the bees. / Please!"

To Neil Gaiman’s poetic tribute to Rachel: “There’s a voice that rumbles beneath us / and after the end the voice still reaches us...”

We stopped using DDT, though NCAP continues fighting the good fight against similar poisons still in use today as new corporations threaten to undo Rachel’s legacy.

Yet, as Rachel’s words reach across time to mobilize our work at NCAP, I am struck by the silence from today's environmental movement with another part of her life. She was also a member of the LGBTQ+ community.

Dorothy Freeman was Rachel's neighbor in Maine and already married when she met Rachel, but they had a deep and intimate relationship from 1953 up until the time of Rachel’s death in 1964. Their love wasn’t a secret between Dorothy and her husband, though Rachel chose not to reveal it to the public. Silent Spring launched her into the public eye and it would've been another weapon the chemical companies could have wielded against her...to silence her. Plus, it was a different era.

Their relationship was important in the fight that would follow the book's publication, as noted in letters Rachel and Dorothy wrote to each other and documented in the epistolary book, Always, Rachel. It was a love that helped stave off Rachel’s depression and loneliness, and fed her creatively and spiritually.

In a letter to Dorothy, Rachel writes:

I don’t suppose anyone really knows how a creative writer works (he or she least of all, perhaps!) or what sort of nourishment his spirit must have. All I am certain of is this; that it is quite necessary for me to know that there is someone who is deeply devoted to me as a person, and who also has the capacity and the depth of understanding to share, vicariously, the sometimes crushing burden of creative effort, recognizing the heartache, the great weariness of mind and body, the occasional black despair it may involve – someone who cherishes me and what I am trying to create…

I know you dread the unpleasantness that will inevitably be associated with [the book's] publication. That I can understand, darling. But it is something I have taken into account; it will not surprise me! You do know, I think, how deeply I believe in the importance of what I am doing. Knowing what I do, there would be no future peace for me if I kept silent... It is, in the deepest sense, a privilege as well as a duty to have the opportunity to speak out – to many thousands of people – on something so important.

The environmental movement still has much to learn from the poet laureate of science. If Rachel taught us nothing else, it was how interconnected we all are—with nature, with each other. Why not recognize (and celebrate) Rachel's whole life as we fight for equity and justice and recognition? How can we in the environmental movement better champion this? Where can we reflect it in our cross-movement activism?

At the very least, let us be silent no more.

Let us stop de-sexualizing Rachel and acknowledge her relationship to a woman. Because there are no single issues. There never was.

Rachel died of cancer only 18 months after the book was published. Dorothy was with her during her battle and at her deathbed.

The last word goes to Rachel. In her final letter to Dorothy, she writes:

You are starting on your way to me in the morning, but I have such a strange feeling that I may not be here when you come – so this is just an extra little note of farewell, should that happen. There have been so many pains (heart) in the past few days, and I’m weary in every bone. And tonight there is something strange about my vision, which may mean nothing. But of course I thought, what if I can’t write – can’t see to write – tomorrow? So, a word before I turn out the light…

Never forget, dear one, how deeply I have loved you all these years.