Recovering Salmon in the Willamette Basin:
the need to address pesticides and other toxins

The Willamette Basin has sustained salmon and steelhead (salmonids) for fifteen million years. Despite their recognized economic, cultural and ecological significance, fish populations are in trouble. Hope for recovery rests on a concerted, broad-based effort to implement actions in a recently developed recovery plan.[1]

More than a million salmon and steelhead once returned each year to the Basin. But today, the spring and fall chinook salmon, coho salmon and winter steelhead native to the Willamette Basin are all threatened by extinction. Native salmon and steelhead are greatly diminished because of flood control and hydropower, the adverse impacts of land management, competition and predation by other species, overfishing, and hatchery impacts, according to the Upper Willamette Recovery Plan. Water quality is identified under the Plan as a significant threat to the Basin’s native salmon runs. Water quality stresses are magnified because large portions of historical habitat are inaccessible due to dams and passage barriers. Thus, salmonids are forced to complete their life cycles in warmer, more polluted and degraded low-lying portions of the Basin.

“We cannot achieve recovery of salmon and steelhead in the Upper Willamette while continuing the past and current practices that degrade salmon and steelhead habitat. Water quality necessary for recovery must be free from lethal levels of contamination… The combined effects of sublethal doses of pollutants are uncertain.” – Recovery plan

Land management impacts salmon habitat in a variety of ways identified in the Recovery Plan. One critical result is the degradation of water quality through introduction of toxins emanating from both agricultural practices and urban/industrial practices.

The Recovery Plan emphasizes the toxic impact of agricultural chemicals in all subbasins, especially to juvenile life stages. Adult fish were not identified as being at risk from toxins except in the mainstem Willamette where both agricultural and urban/industrial sources are identified as a concern. In general, the scale of the threat from toxins is considered more serious for Chinook. [2] Additionally, since the publication of the Recovery Plan in 2011, the 2016 status reviews (which re-evaluated the population status) identified toxic contamination entering the migration corridor from multiple sources as a “growing concern.”[3]

In line with the identification of toxins in water as a threat, the Recovery Plan includes, as one of the fourteen overriding strategies: “Restore degraded water quality and maintain unimpaired water quality.” The Recovery Plan identifies, as a Priority 1 action, the reduction of “non-point sourcing and loading of nutrients and pesticides from land use activities in subbasin streams [and] the Willamette River mainstem.”

Certain pesticides are dangerous enough to cause fish kills. Other pesticides can kill or slow the growth of stream invertebrates (which salmonids rely upon for food) or stream algae (food for stream invertebrates). Still other pesticides disrupt the salmon sense of smell, interfere with brain chemicals, or disrupt swimming behavior.[4] Sixteen pesticides have been determined particularly harmful to ESA-listed salmon and steelhead in the basin. National Marine Fisheries Service determined that sixteen pesticides jeopardize the continued survival of one or more listed species in the Willamette Basin. These pesticides are listed in the table below. 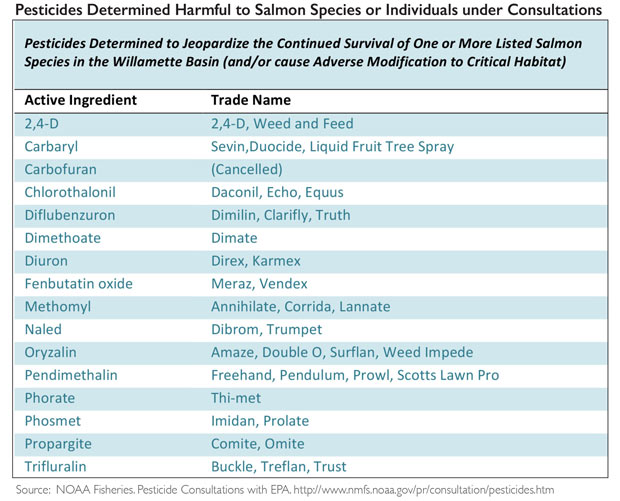 Low flow, shallow habitats such as small streams, braided streams, backwaters, overflow (side) channels, and floodplains are used by rearing and migrating juvenile salmonids extensively.[5] Because they are protected from higher flows, they also provide less opportunity for dilution and dissipation of pesticide loads.