Thanksgiving: A Fable of Interracial Harmony 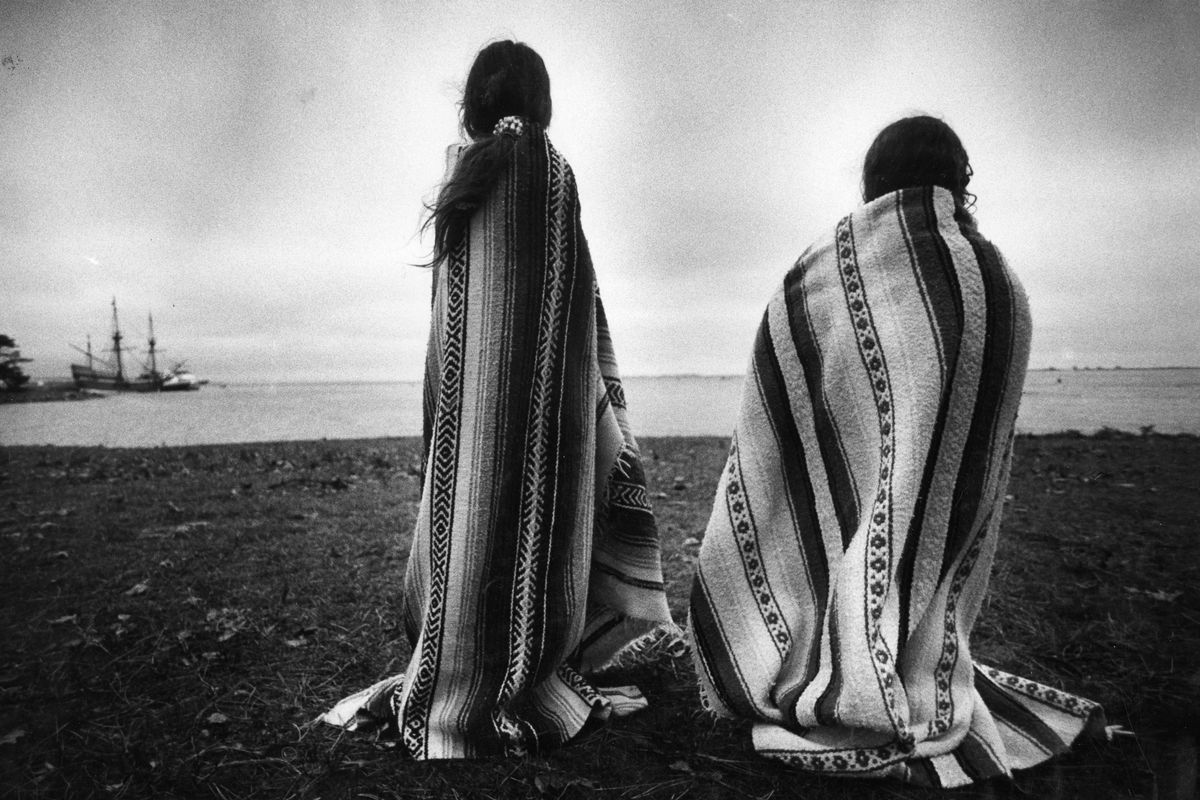 As the NCAP staff give thanks for family and friends this week and acknowledge with gratitude the labor of farmers and farm workers who make our feasts possible, we also reflect on the history of the land where our food is grown. At NCAP, our work includes expanding organic and sustainable agriculture and advocating for policies and practices that increase the health of our soils and ecosystems. Just like advocating for healthier land management practices, we believe it is important to understand the complex interactions that take place on the land where we reside and have an accurate understanding of the intricate relationships that make up history.

NCAP staff reside on the stolen and occupied ancestral homelands of the Chehalis, Kalapuya, Molalla, Santiam, Northern Paiute, Shoshone-Bannock, Tenino and Wasco Peoples. We acknowledge the brutal and endless atrocities, including forced removal, experienced by Native American people in our region and recognize that traditional ecological knowledge and the inherent rights of nature are a guiding force to our work.

In 1621, the Plymouth colonists and the Indians shared a harvest feast which was the first Thanksgiving in recognition of the Indians who helped them to survive their first year in the new world. This is the holiday story that many of us are familiar with today.

However, what many of us were told in school isn’t exactly true and it’s important to learn what really happened. The holiday that we know paints a deceptively harmonious picture of relations between the colonists and the Indians who were the Wampanoag Tribe. It masks the long and bloody history of conflict between Native Americans and European settlers that resulted in the deaths of tens of thousands of people including entire tribes as well as indentured servitude, imprisonment, slavery, broken treaties and theft of land.

The first Thanksgiving was not actually a “thanksgiving” in Pilgrim terms, but instead a “rejoicing.” Giving thanks required fasting and contemplation whereas rejoicing included feasting, drinking, militia drills, target shooting, and contests of strength and speed. The Wampanoags were led by Ousamequin (often called Massasoit, a leadership title). An experienced diplomat, he was engaged in regional politics, of which the Pilgrims were a part. While the celebrants may have feasted on wild turkey, the local diet was fish, eels, shellfish, and a Wampanoag dish called nasaump: boiled cornmeal mixed with vegetables. There were no pies because there was no butter, wheat flour, or sugar.1

Just as there were no pies, the Pilgrims did not actually extend a warm invitation to their neighbors. Instead, the Wampanoags showed up unbidden in response to the gunfire, with perhaps ninety men, honoring a mutual-defense pact negotiated the previous spring. They came not to enjoy a multicultural feast but to aid the Pilgrims who they believed to be in danger. The Pilgrims usually misread the actions of the Native peoples but on this day, they recognized their positive intent.1

The Misconception of Harmony

Unfortunately, from that 1621 gathering, no centuries-long cooperation emerged and though New Englanders held thanksgivings—they held them for different reasons: to celebrate bloody victories over the Native Americans. Two notable examples took place in 1637 and 1676.1 In 1637 the Pequot Massacre took place, when over 700 Native American men, women and children were slaughtered in Mystic, Connecticut during their annual Green Corn Dance. The following day, the first official “Thanksgiving Day” was proclaimed by the Governor of the Massachusetts Bay Colony to celebrate their victory in battle.2

In 1676, the year of a massacre of multi-tribal women, children and elders at Turners Falls, colonists beheaded and mounted the head of Wampanoag chief Metacom at the entrance to Plymouth on a pike, where it remained for 24 years, while his dismembered and unburied body decomposed. He was also known as Pometacom and was Ousamequin’s son.3 Also displayed on a pike was the head of Weetamoo, a Saunkskwa or female leader of the Pocasset. She was Pometacon’s ally and relative.4 Wampanoag survivors were likely sold to colonizers in the Caribbean as slaves. Colonists celebrated a thanksgiving and declared: "there now scarce remains a name or family of them [Natives] but are either slain, captivated or fled."3

During the next two centuries, Native American people across the Americas suffered violent encounters and deaths, imprisonment, indentured servitude, convict labor, and debt peonage, which often resulted in the enslavement of their children.

The holiday that we celebrate today was established with a specific intent. The year 1863, during which Abraham Lincoln officially declared it a national holiday, was the same year the Sioux were being removed from Minnesota and the bounty for a Sioux scalp was $25.5 The new story aligned with the defeat of American Indian resistance in the West and a concern regarding a rising tide of regret called “imperialist nostalgia.” Glorifying the Pilgrims also diverted attention from the brutality of Jim Crow and racial violence related to slavery.3

In this new Thanksgiving story, notably there were no Wampanoags until the Pilgrims encountered them. However at the time the Pilgrims landed, trails and roads connected dozens of Wampanoag communities and extended to gathering, hunting, fishing and agricultural sites. Agriculture, adopted 200 years before the Pilgrims’ arrival, led to a system of sachems, leaders who addressed the community needs, established tributary and protectorate relationships with other communities, and negotiated diplomatic relations with outsiders.3

Acknowledging the True History of the Holiday

Today, the Wampanoag make up two federally recognized tribes, the Mashpee Wampanoag Tribe and the Wampanoag Tribe of Gay Head, descended from the confederation of groups that once stretched across large areas of Massachusetts. Since 1970, the United American Indians of New England (UAINE) have organized a gathering on the fourth Thursday of November at Cole’s Hill near Plymouth Rock, for a “National Day of Mourning” attended by around 1000 people. Similar events are held nationwide. The sugar coated holiday still justifies colonial violence, genocide, white supremacy and slavery. It obliterates the history of the Native Americans prior to the arrival of the Pilgrims. We are hopeful that our political leaders will join those, such as Senator Bernie Sanders (2018), who are finally starting to acknowledge the true history of the holiday:

“On this Thanksgiving we must take time to remember that we owe the Native American people a debt of gratitude that we can never fully repay. Native Americans have been lied to, treaties they signed have been abrogated and their views have been ignored on issues that impact their communities. Throughout our history as a nation we have cheated the Native American community. That has got to change. We must establish a new relationship between the federal government and Native Americans so that they are finally treated with the respect and dignity they deserve.”6

Many Native Americans hold a tradition of routinely giving thanks. In particular, gratitude is given to the land, the animals and the plants that give their lives to provide food or medicine. Despite the way Thanksgiving’s history is often inaccurately portrayed, it is truly wonderful to have a holiday focused on celebrating abundance, family, friendship and reciprocity. On this Thanksgiving as you pause to give thanks, join us in also remembering and honoring the cultures and lives of the many Native American elders, peoples, tribes, cultures and ways of life that were lost during the true colonial history of the United States.