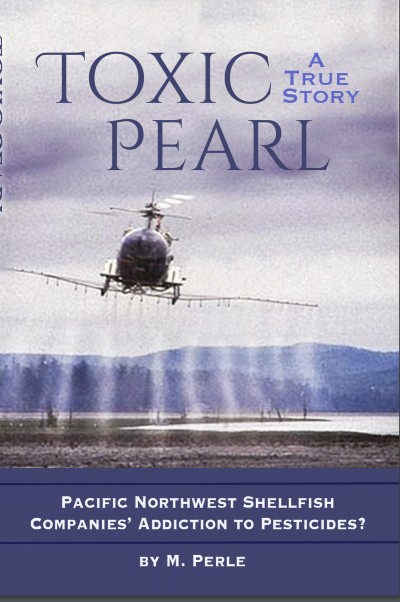 CORRECTION: An earlier version of this blog post stated that people in the area “struggled to control eelgrass and other organisms that threaten the oyster beds.” We regret any confusion this caused and have modified that sentence to reflect the use of herbicides for controlling vegetation.

The story of the Toxic Pearl belongs on the bookshelf next to A Bitter Fog: Herbicides and Human Rights by Carol Van Strum and Fresh Fruit, Broken Bodies: Migrant Farmworkers in the United States by Seth Holmes. It’s a story of invasive species, pesticides and a community directly impacted by the shellfish industry. The author is clearly inspired by the academic conclusions and bravery of Rachel Carson. The author, who has decided to remain anonymous because of concerns for personal safety, brings this true story to light to expose aerial applications and other pesticide controls in the fragile ecosystem of Willapa Bay and Grays Harbor, Washington.

NCAP has been involved in this work by supporting local activists and sending comment letters on the Supplemental Environmental Impact Statement (SEIS) to Department of Ecology (DOE) in 2014 and 2017. Thankfully in 2018, the DOE denied a request to apply neonicotinoid pesticides. The use of imidacloprid was intended to control two native species of burrowing shrimp, ghost shrimp (Neotrypaea californiensis) and mud shrimp (Upogebia pugettensis), which are negatively affecting oyster farming. This long and complicated history is well researched and summarized by the author. Oyster farmers in the area also used herbicides on eelgrass and spartina, which impact aquaculture.

We support efforts to protect this fragile ecosystem from potentially dangerous pesticide applications. Protecting community and environmental health is one of the most fundamental responsibilities of democratic governments. But all too often, decision-makers hear primarily from those who have a direct economic stake and not those who have a personal stake. The oyster crisis showed that the agencies will sometimes listen to public voices.

This month, a Washington State bill was submitted by Representative Walsh to override the decision by Department of Ecology and allow inadequately tested chemical controls for burrowing shrimp (See House Bill 1037 here: http://lawfilesext.leg.wa.gov/biennium/2019-20/Pdf/Bills/House%20Bills/1037.pdf). HB 1611 and SB 5626 give similar authority and would also threaten the survival of orcas and chinook salmon by disrupting the delicate balance of this ecosystem. The public will have to remain active and engaged in order to protect this critical area.

In the meantime, Toxic Pearl offers the most conclusive summary of the complicated history of this economic and environmental struggle. The future of oyster farming in Washington State depends on the industry’s ability to adopt sustainable cultural and management strategies.

The author, M. Perle, has set up a website with orders and additional information: http://www.toxicpearl.com/

You can order the book online or in person from Orca Books in Olympia, or secure a Kindle version from Amazon (only $5.99).

Books are also available from Powell’s Books in Portland, Eagle Harbor Books in Winslow (Bainbridge Island), BookTree in Kirkland, the BookShop in Edmonds, King’s Books in Tacoma, Liberty Bay Books in Poulsbo, and many more locations).

You may also find  a review (with photos) on the Cliff Mass Weather and Climate Blog: