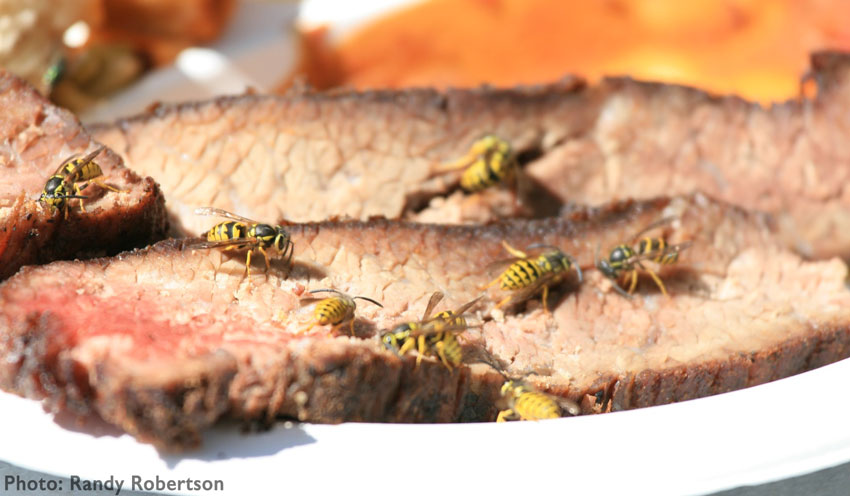 Enjoying a meal outside in late summer can be nearly impossible if yellowjackets or other wasps have taken up residence nearby. They eat your food and can be aggressive. Yellowjacket behavior makes them difficult to love, but remember that they are an important part of the ecosystem, too. Yellowjackets feed their young large numbers of insects that might otherwise damage trees or crops. They also feed their young houseflies, and lots of them. This means that when nesting in areas of little human or animal activity, just leave them alone. For areas near your home, try these steps to reduce populations.

By late summer, nests are already well established. Mint is a natural wasp repellent, so next spring try planting mint near the house and using a peppermint oil spray on the eaves to keep yellowjackets from moving in. For the rest of this summer, prevent drawing yellowjackets toward your outdoor activity when possible.

Traps can be an effective, pesticide-free technique for managing yellowjackets.

Synthetic bug sprays kill other beneficial bugs and can be harmful to humans as well. If you want to use a spray against flying yellowjackets or a nest, several botanical oil products are available. Look for one with peppermint oil and a surfactant as active ingredients.

Removing a nest is a chore that should be tackled only by professionals with expertise in working around stinging insects and protective clothing. Aerial nests can be removed at night by enclosing them in a plastic bag and pulling them loose. Other kinds of nests can be vacuumed out. Some companies provide this service inexpensively because they sell the wasps as a source of venom to pharmaceutical companies.