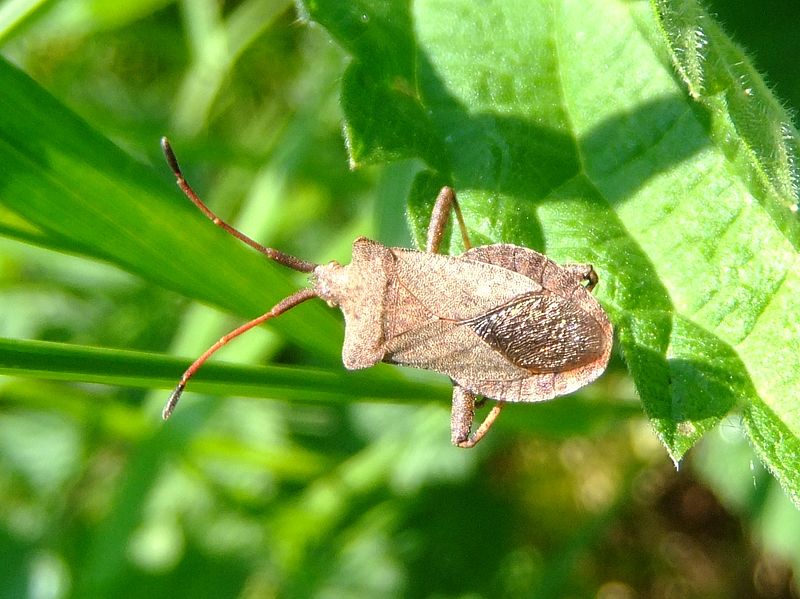 Squash bugs are one of the most troublesome pests of pumpkins, winter squash, and sometimes melons. They can be very difficult to control. Squash bug feeding can produce speckled leaves that may later turn brown and die. Heavier feeding can cause leaves and vines to suddenly wilt and die.

Adult squash bugs, Anasa tristis (DeGeer), are grayish brown bugs with a dark drop-shaped wing pad at the tail end of the body. They have orange and brown markings along the edges of the abdomen as well as on the underside of the body. They are about 5/8 of an inch long.

The slightly oval eggs, about 1/16 inch long, range in color from yellowish orange to bronze or brick red. They are neatly deposited in groups of 20 to 40, often found on the underside of leaves.

Squash bugs are sometimes confused with stink bugs. In fact, squash bugs do stink when crushed but stink bugs are wider and rounder with a distinctive "shield" shape. And, stink bugs do not feed on squash. 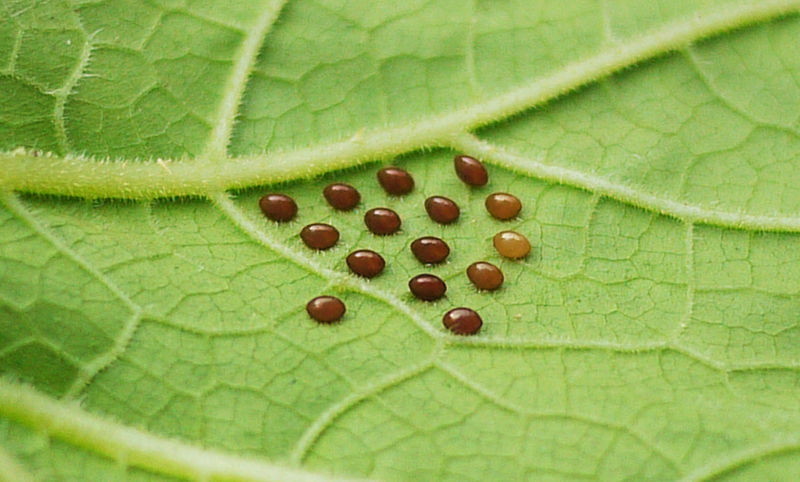 When the weather warms in the spring, adult squash bugs emerge from their overwinter shelters. They find young squash or pumpkin plants and start to feed and mate. Females lay eggs on the underside of leaves or on stems. The eggs hatch in one to two weeks. The five stages of nymphal development take place over four to six weeks before reaching adulthood.

Females that overwinter continue to lay eggs through mid to late summer, averaging 250 eggs over the season. In some places with a long growing season, their daughters may also start laying eggs that produce yet another generation.

Masses of nymphs and adults may cluster at the base of plants or under low foliage, clods of dirt or any nearby hiding place. They quickly seek cover when disturbed.

In the fall, unmated adults find a place to overwinter. This may be under plant debris, leaves, wood, stones, or in wood piles. They may also seek shelter in outbuildings and other protected places near the garden. Nymphs don't survive, dying off after hard frosts. 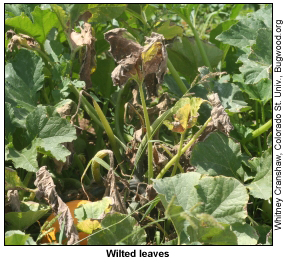 When they feed, squash bugs use parts of their mouth called stylets to pierce through the outer plant layer (epidermis) and suck out plant juices. This "lacerate and flush" method of feeding can damage inner xylem vessels that transport water and nutrients from plant roots to the leaves.

The first sign of plant damage can be seen on the leaves. Small yellow specks appear that later turn brown. Heavy feeding causes the whole leaf to turn brown and wilt. Sudden wilting of a small part or an entire section of a plant results from stem feeding that blocks the movement of water beyond the point of damage. Wilted leaves and stems become dry and crisp and turn black.

Squash bugs damage can cause corky spots or distortions of the fruit and can ultimately lead to rotting.

Squash bugs can easily kill small plants, but larger plants can survive, losing only some leaves and vines. However, heavy infestations of squash bugs can overwhelm even large plants.

A relatively new disease called cucurbit yellow vine disease (CYVD) has been associated with squash bugs. Overwintering squash bugs can harbor CYVD bacteria and transmit it to new spring plants. Found in Texas as well as some midwestern and northeastern states, this disease causes rapid yellowing and wilting. Nothing can be done to prevent the infected plant from dying.

Get a jump on controlling squash bugs by monitoring the garden at least once week as spring starts to warm up. Diligent hand-picking can provide effective control in home gardens. Kill squash bugs and nymphs by crushing them or drowning them in a container of water with a little detergent mixed in. Inspect young squash plants daily and gently rub off or squish eggs on the underside of leaves.

"Trap" squash bugs by laying boards or pieces of heavy cardboard around the garden. On your morning rounds, lift the boards. Clustered squash bugs can be crushed, vacuumed up or tossed into a water/detergent mixture.

Row covers made of gauze-weight fabrics that are tightly secured can exclude squash bugs, preventing both feeding and egg laying. Row covers need to be put in place before seedlings emerge or at the time of transplanting. They must be removed before flowers bloom so that bees and other pollinators have access to the blossoms. After the fruit sets, row covers can be replaced. Screened plant cages can be used in the same way.

Many gardeners have favorite squashes, but some, such as pumpkins, hubbard, yellow straight neck and crook neck, are particularly susceptible to squash bug infestation. Consider growing more resistant squash such as zucchini, acorn, spaghetti, and butternut. Sweet Cheese, Royal Acorn, green striped Cushaw, Pink Banada, and Balck Zucchini have been shown to be among the least susceptible.

Plants grown on bare soil may suffer less damage. Mulches around plants can be problematic because they offer shelter for squash bugs. However, mulches may be less problematic if tightly secured row covers are used.

Trellising vining types of squash and melons may these plants less susceptible to squash bug infestations. 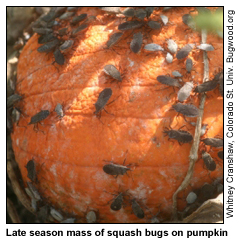 "Sanitation" at the end of the growing season is the most important step gardener's can take to prevent problems in next year's garden. Deprive squash bugs of their food source by destroying all vines and remaining fruit soon after harvest. Tilling vines into the soil will destroy the vines and bury some squash bugs at the same time. Alternatively, vines can be composted. Clean up any other debris around the garden that can serve as overwintering sites. These steps reduce the numbers of overwintering adult squash bugs.

Vigilant monitoring, especially early in the season, and handpicking of adults, nymphs and eggs can help reduce squash bug populations. Consider tightly secured row covers or plant covers for some of the growing season. Protect next year's garden by cleaning up and destroying vines and remaining fruits shortly after harvest.