Despite years of effort to recover endangered and threatened Pacific salmon and steelhead, some of the most toxic pesticides still legal in America continue to enter their habitat. In the Pacific Northwest and California, 17 runs of salmon and 11 runs of steelhead listed as endangered or threatened under the Endangered Species Act (ESA) are exposed to pesticide contamination. Fish and other aquatic organisms are particularly vulnerable to pesticide contamination of water, since pesticides can be carried far downstream and aquatic organisms are immersed throughout their lives.

NCAP and its partners have been fighting for clean water for salmon since 2001, pushing the EPA to assess and reconsider registration and label requirements for 54 of the worst pesticides.  Our work has compelled the EPA to consider endangered species in pesticide re-registration decisions.  For salmon, NCAP’s efforts resulted in interim no-spray buffer protections along salmon-bearing waters until assessments (known as consultations) are complete.

Much remains to be done, as permanent and effective protections of salmon and steelhead habitat from pesticide contamination are not yet guaranteed. Until 2014, the EPA allowed buffers to lapse after consultations were complete, even when the consultations show a significant adverse impact and the EPA had not implemented protective measures.

In 2014, NCAP won a victory, with a settlement agreement requiring the EPA to reinstate no-spray buffer zones for five organophosphate and carbamate pesticides in salmon and steelhead habitat across Oregon, Washington and California. We are working to make sure farmers and applicators are aware of the buffers to reduce pesticide runoff into salmon waters. We will also work with growers, university researchers, state and federal agencies, and other partners to encourage effective alternatives to these pesticides. 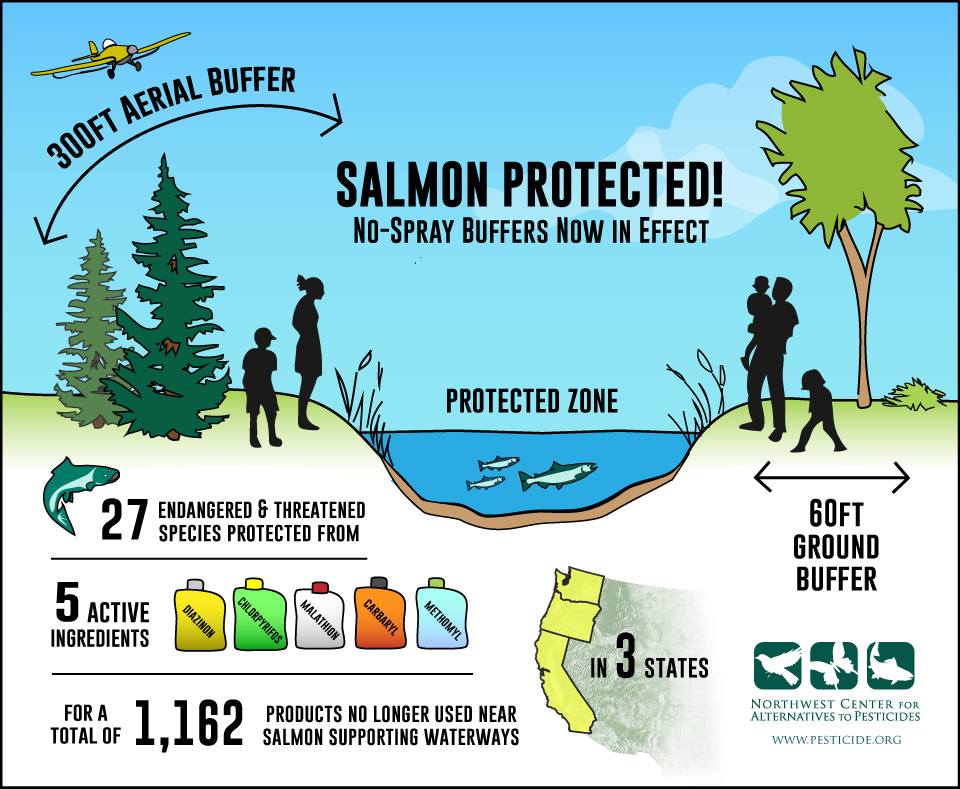 Here's how you can help:

Help us get the word out about the enacted no-spray buffers to protect salmon from pesticides.

NCAP undertook an effort to understand how well the buffers are being communicated. NCAP looked at state efforts to inform applicators of these requirements. In addition, NCAP conducted a survey of grower contacts and advisors to assess the level of understanding of the buffers among key farmer contacts. Read our report here!

This video series showcases salmon heroes making a difference in their communities. Get inspired to help salmon in your community!