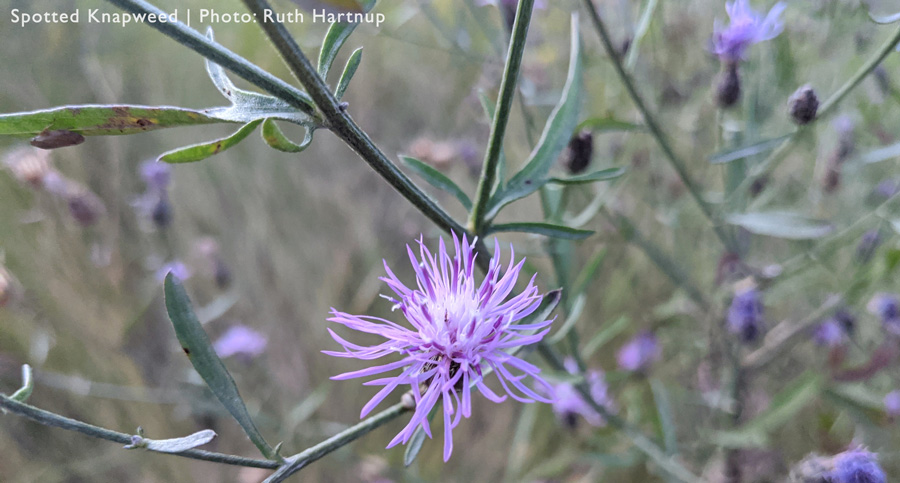 Knapweed is considered a noxious weed because of its aggressive ability to spread and threaten the survival of native and desirable plants.1 This plant can greatly disturb ecosystems by worsening soil erosion, taking up available soil nutrients, and even releasing a "natural herbicide" that kills other nearby plants.2 Knapweeds thrive in areas with bare ground, especially places that have been disturbed like farm fields, pastures and roadsides.2

It's very important to identify the plant early before it flowers (and then can spread more easily), in order to prevent an infestation.1 Small disturbances can cause knapweed seeds to spread, and their seeds can be viable in the soil for up to eight years.3 People are the worst culprit for spreading knapweed seeds—on vehicles, clothes, farm equipment, etc.—but seeds are also spread by other animals, wind and water.2 Be sure to clean vehicles and other gear if they have been in a knapweed-infested area to avoid spreading it elsewhere.3

You can hand pull or dig up knapweed plants, removing as much of the root as you can.3 If the soil is compacted, a shovel or trowel might be needed. Be sure to monitor areas where plants have been removed and pull up any new sprouts, since the previous soil disturbance can encourage seeds to germinate.3

Mowing alone is not enough to control knapweed, since it will continue to flower and spread seeds.3 A better option is to till and cultivate an area, in order for seeds and plant matter to be covered by at least 1.5 inches of soil.3

The best defense against a re-infestation of knapweed is to promote the growth of perennial grass, cover crops or other vegetation that will out-compete the knapweed.3 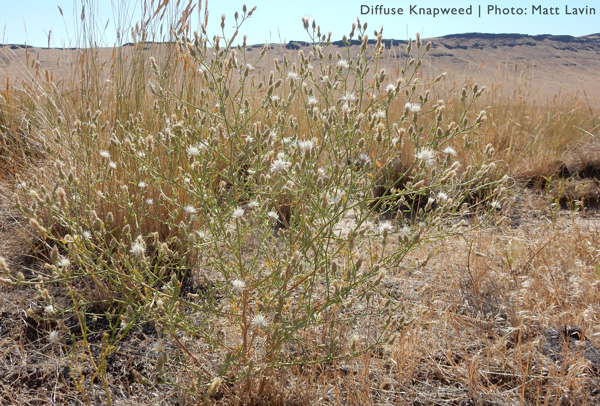 Success Story: Pulling Together in the Wenatchee National Forest

They called their work “pulling together.” Bent over, crawling on hands and knees, or hanging from cliffs, this group of volunteers from schools, mountaineering societies, homeowners’ associations, environmental groups, as well as inmates from the county jail scoured roadsides, public parks and parking lots to uproot knapweed by hand.

Alarmed in 1997 by plans in the Wenatchee National Forest (in central Washington) to treat roadsides with the herbicide Roundup, Pat Rasmussen spearheaded the formation of the Icicle Canyon Knapweed Handpulling Project. “They were proposing to keep the roadside clear of weeds on a road along a salmon river,” she explained. “This is an area that gets 800,000 visitors a year, and is an entry into the Alpine Lakes Wilderness Area. You have to get a permit even to enter that area—it’s beautiful. They were planning to just kill everything.”

An imported weed from Europe, diffuse knapweed has thrived in the disturbed and dry areas that predominate at the lower elevations of the Wenatchee National Forest. “If you have an intact forest, it’s not a problem because there’s shade,” said Rasmussen. “It likes disturbance and dry, sandy land.” Under those conditions, knapweed spreads rapidly both because it produces a huge number of seeds and because it releases a chemical that retards the growth of other plants.

Lack of funding and human-power had created a sense of desperation about the prospects for controlling this weed, leading the Forest Service to propose Roundup, a broad-spectrum herbicide comprised of glyphosate.

Rasmussen and her group proposed a demonstration project along three stretches of road to test the effectiveness of handpulling. The first year, 150 volunteers worked three stretches of road in half-mile sectors. Using a strategy she called “stronghold,” the volunteers focused on gaining control of the weed in specific areas, and then connecting those areas. “It is important to look at the weeds not as everywhere or impossible, but to look at what we can do, focus on an area, get that under control and expand from there,” Rasmussen explained.

In the project’s second year, inmates from the Chelan County jail started helping pull weeds. “It was an incredible experience,” Rasmussen said. “They have this great time—pulling weeds is fun. Once they do this, they want to get out and stay out. We were able to clean up huge areas."

The volunteers' success was visible. “Now I can do a half mile stretch in an hour and a half by myself when originally I needed busloads of volunteers to clear the same area,” said Rasmussen. “They’ve learned that it’s really better to do the handpulling because you get a better result,” Rasmussen said, speaking about the Forest Service. Back in 1997, NCAP honored the Icicle Canyon Knapweed Handpulling Project for its initiative in demonstrating the effectiveness of alternatives to herbicides.