The mission of the Northwest Center for Alternatives to Pesticides (NCAP) is to protect the health of people and the environment by advancing alternatives to pesticides.

With our mission and values in mind, we have considered the health and environmental effects of the proposed use of Bacillus thuringiensis v. kurstaki (Btk). We consider Btk, a biological control, to be the most reasonable alternative to using toxic synthetic chemicals for eradicating gypsy moths at this time. 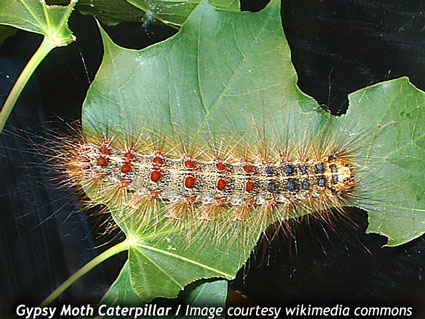 NCAP has history with the issue of gypsy moths and the use of Btk. In the 1980s, a large infestation of gypsy moths was discovered in Lane County, including Eugene. At that time, the Oregon Department of Agriculture (ODA) proposed spraying Btk over most of the acreage and spraying one of two synthetic chemicals - including Carbaryl - over the epicenters of the infestation. NCAP was one of many voices that pushed ODA to move away from Carbaryl and other synthetic pesticides and to use only Btk.

The 1980s infestation had eluded state monitoring for several years, so the state ended up spraying more than 230,000 acres. Acting swiftly to control new infestations can reduce pesticide use by keeping the control area smaller.

Btk is not without concern, as it does present potential to hurt non-target butterflies and moths. We care about the health of pollinators and do not want harm to come to them. Yet, when compared with the other available alternatives, we believe that Btk is the most benign overall to environmental health. Btk is approved by the Organic Materials Review Institute, which means that it's approved for use in certified organic agriculture. We believe it is better than using a synthetic insecticide like Carbaryl. Additionally, one of the other insecticides that the State considered for past use is diflubenzuron, which the National Marine Fisheries Service has concluded to cause jeopardy to numerous runs of endangered salmon and steelhead.

Other alternatives that target only gypsy moths — and do not affect other moths and butterflies — include a pheromone, a virus, and a fungus. Like Btk, all of these would be considered biological controls and would be used in place of synthetic pesticides. Consideration should be given to additional biological control tools for use in the Gypsy Moth eradication program as these tools become available and are found to be safe and appropriate for such use.

With regard to human health, it is not possible to say that there is no risk associated with the proposed spray. However, studies of people exposed to Btk during aerial spray programs, including some studies done in Oregon, have found that Btk causes few immediate adverse effects.

NCAP has long advocated — and will continue to advocate — for the public’s right to know the identity of all ingredients in any pesticide product.

For this year’s proposed eradication, we still consider Btk to be the most reasonable alternative to using synthetic chemicals for eradicating gypsy moths. We've met with ODA representatives about this proposal, in an effort to understand the problem, what alternatives were on the table, and whether they had vetted the proposal with scientific experts. We recognize concerns about the unknowns including the potential for undisclosed ingredients, and have asked ODA for more information about this.

With regard to the proposed spray area, the use of Btk, and other aspects of this proposal, we have considered these and have the following perspective:

We want to emphasize that with any program like this, public agencies must make every effort to communicate clearly and broadly with the public about steps people can take to protect their health, including publicizing a phone number to call if they experience any symptoms.