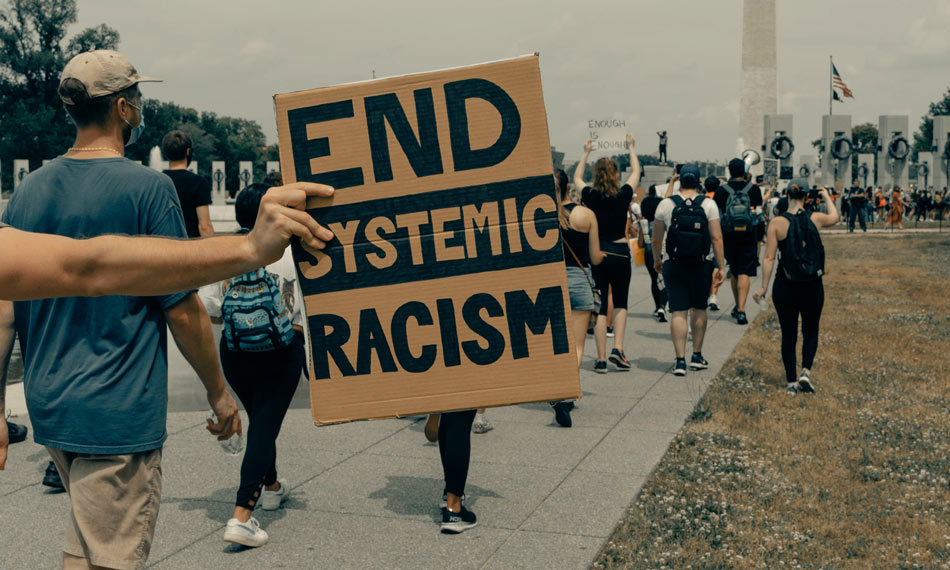 Last summer, NCAP hosted a film showing of the movie Circle of Poison, inspired by David Weir and Mark Schapiro’s book of the same name. The term, coined by authors, refers to the practice of manufacturing and exporting domestically banned pesticides for use on crops elsewhere, some of which returns on imported foods. Legal loopholes have allowed for the manufacture of pesticides - deemed unsafe for the American people - for export to developing countries where they cause devastation in the form of illness, severe birth defects and cancer.1

Staff discussed the film again recently as an example of American policies that expressly harm non-white communities. In our previous newsletter, NCAP staff reviewed the history of pesticides and the role pesticides play in violence and systemic racism. Continuing this theme, we detail some examples of pesticide policy that has effectively protected those with power and privilege to the detriment of non-white communities and those living in poverty.

Let’s start with the Food Quality Protection Act (FQPA), the standard used by the Environmental Protection Agency (EPA) to regulate pesticides with a health-based focus. The FQPA was passed unanimously by Congress and then signed into law by President Clinton in 1996. The FQPA amended the Federal Insecticide, Fungicide, and Rodenticide Act (FIFRA) to “perform more refined pesticide risk assessments, to better reflect real-world situations.”2 When making a registration decision, a pesticide can only be approved if it has a “reasonable certainty of no harm.”2

But there’s a clearly carved out exception in calculating risk. Assessments must “consider aggregate risk from exposure to a pesticide from multiple sources (food, water, residential and other non-occupational sources).”2 Did you catch the exception? Occupational sources of exposure are excluded, including those to farmworkers. There are about 2.5 million farmworkers in the United States and about 73% of them were born outside of the United States.3

The practice of excluding agricultural workers from Fair Labor Act polices that protect employees is in fact rooted in slavery. The statutory exclusion of agricultural workers from policies like overtime, minimum wage and sick leave was well-understood as a race-neutral proxy for excluding Blacks from benefits and protections made available to most Whites. It made the loss of free slave labor a little easier on farm owners.4 Remarkably, despite these racist origins, an agricultural and domestic worker exclusion remains in effect today.

Risk assessments have also systematically excluded Indigenous Peoples in the state of Washington when considering standards for toxic pollutants. The Clean Water Act requires states to keep water quality standards that protect designated uses of water. The water must be clean enough for recreating, drinking and to safely eat fish caught there. Pacific Northwest tribal populations typically consume significantly more fish and shellfish than other people in the region.5 Yet Washington’s Department of Ecology has grossly underestimated the state’s fish consumption rate when determining safety. Set at 6.5 grams/day, the standard protects those who eat less than a serving of fish per month. “The longstanding inaccuracies found in the [fish consumption rates] have left tribal communities who rely upon fish and shellfish unduly exposed to toxic chemicals,” says Michael Grayum, executive director of the Northwest Indian Fisheries Commission (NWIFC). “This type of environmental policymaking, which provides less protection for a population of people and subsequently leads to the unequal exposure of pollutants, is undoubtedly an environmental injustice.”6

When a state is failing its obligations under the Clean Water Act, the Act requires EPA to step in. After years of debate, the EPA issued stricter rules in 2016, setting a fish consumption rate of 175 grams of fish, or about a serving per day.7 The standard matched that of Oregon’s, which was developed in conjunction with tribes through a public process.8 But then, in 2019, the Trump administration’s EPA sided with industrial polluters and revoked its own rule. NCAP will continue to advocate with our partners and supporters for a stronger fish consumption rate in Washington.

As mentioned earlier, farmworker health isn’t considered when assessing risk. So how are workplace hazards around pesticides addressed? The Worker Protection Standard (WPS) is an EPA law designed to protect workers from pesticide poisoning and injury. It contains requirements for pesticide training, notification and use.

The pesticide Application Exclusion Zone (AEZ) is a key provision of the WPS law, which states that workers and their families cannot be within 100 feet during an active pesticide spray. The EPA designated 100 feet as a minimal preventative no-spray zone to protect farmworkers. Workers and their families must vacate housing and other buildings that exist within that 100 foot exclusion zone. In recent years in Oregon, there was enormous public outcry when Oregon Occupational Safety and Health Administration (OSHA) proposed that workers and family members should “shelter in place” inside housing to avoid exposure.9 Advocates and attorneys who represent farmworkers, including representatives of Pineros y Campesinos Unidos del Noroeste (PCUN) and Oregon Law Center, argued that due to the poor construction of some farmworker housing and outdoor cooking, eating and play areas being located near crops that are sprayed, the proposed rule would not protect workers and their families from pesticides that may drift.10 After much debate, Oregon adopted stricter standards than federal law in 2018. While we believe both Oregon and federal law could do more to mitigate risk to farmworkers and their families, this is a good example of public pressure leading to positive change.

Turning now to the current pandemic, farmworkers are at increased risk as they continue to bring food to our tables. A global shortage of personal protective equipment has put farmworkers at risk both for coronavirus and for pesticide exposure. Agricultural workers are excluded from receiving sick pay if they become ill (as referenced earlier), and they usually lack health insurance. The $2 trillion pandemic aid package Congress passed does not offer any assistance to undocumented immigrants, even though they pay billions of dollars in federal taxes annually,11 and Immigration and Customs Enforcement (ICE) continues to detain and deport immigrants. 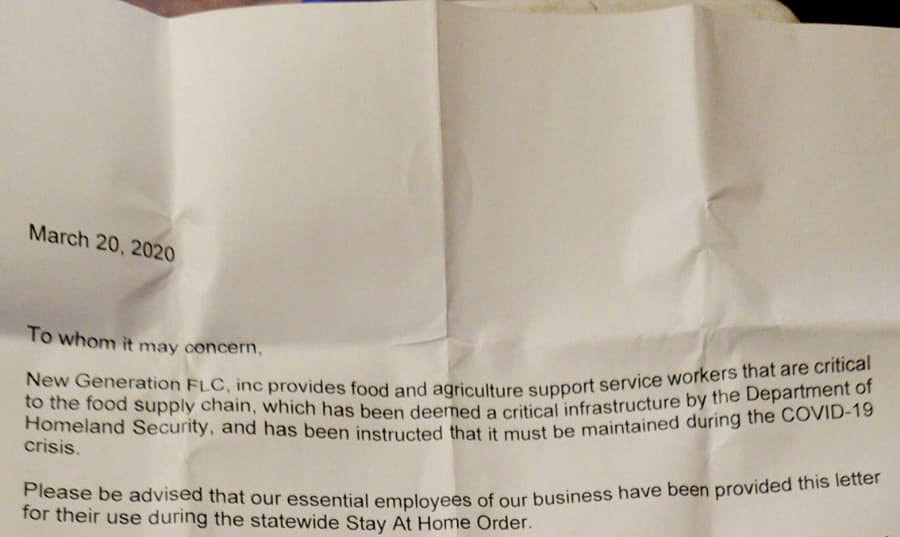 A letter provided to farmworkers in case they are stopped for violating California's shelter-in-place order.12

Letters notifying undocumented workers that they are essential, when they still officially face potential deportation, are sending the same mixed signals that have long been at the root of American agricultural labor policy. “Some people are really confused by the message,” said Reyna Lopez, executive director of PCUN. “The government is telling them it needs them to go to work, but it hasn’t halted deportations.”12

Moving from the job site to the home, we find protections lacking for those living near pesticide manufacturing plants. In a 2011 review of 94 studies on residential proximity to environmental hazards, including chemical plants, studies found that those living near hazardous substances had a significant increase in adverse health outcomes, including birth defects, childhood cancers, asthma hospitalizations and chronic respiratory symptoms, stroke mortality, end-stage renal disease, and diabetes.13 Communities living near chemical and hazardous waste plants are a majority non-white or those with limited incomes.14

One might assume that demographics would shift after a plant is installed. Those with more financial means will leave, and those with limited incomes will be unable to afford to move. While that is true to an extent, the reality is much more concerning. According to an environmental justice study by researchers at the University of Michigan and the University of Montana, communities with limited resources and those that are composed predominantly by people of color are targeted by industries when deciding where to locate hazardous waste sites and other polluting facilities. These communities are seen as the path of least resistance because they have fewer resources and political clout to oppose the siting of unwanted facilities. 15

And once a manufacturing plant goes in, not enough is being done to protect the surrounding community. In addition to air pollution, there is the very real threat to physical safety. In 2013, an explosion at a fertilizer plant in West, Texas killed 15 people, injured at least 200, and destroyed dozens of homes, schools, and a nursing home.16 Incomplete government data sets and patchy oversight raised more questions about chemical risks than regulators could answer.17 In the wake of the West, Texas, tragedy, the Obama administration drafted a new policy, called the "Chemical Disaster Rule," to make it easier for the public to access hazard-planning documents and required increased coordination with first responders. It also required companies to provide increased emergency planning information to local officials and to hold more frequent safety trainings.18 EPA delayed implementation of the rule after Trump took office and announced it would largely unwind the regulation that was widely unpopular in the chemical industry. Late in 2019, EPA Administrator Andrew Wheeler finalized rescinding most of the rule.19

Where Do We Go From Here?

In a glaringly flawed system rooted in racism, NCAP is dedicated to achieving social justice and equity by dismantling injustices in our environment. In addition to providing technical information on pesticide risks and alternative methods for pest control, we are monitoring and finding solutions to the root causes of pesticide exposure. Join us in calling, commenting, testifying and marching so that policy makers know we demand better. And remember to vote!

Stay tuned for action alerts on pesticide policy reform. We expect the “Protect America’s Children from Toxic Pesticides Act” to be introduced next Tuesday, which would significantly increase protections for children and frontline communities, as well as give back local control to communities that want to ban specific pesticides. Help us put pressure on Congress to get it passed!