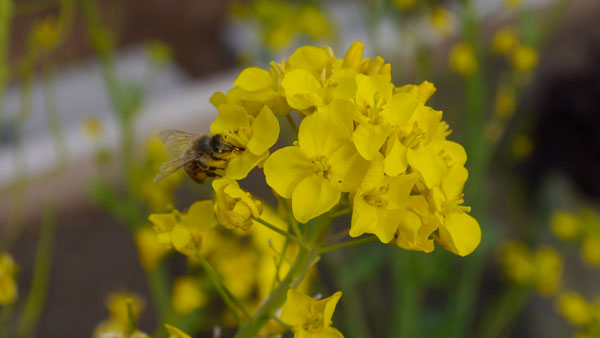 Environmental Protection Agency (EPA) has proposed new label language for pesticides that are toxic to bees. The language would prohibit growers and pesticide applicators from using certain pesticides when contracted bees (usually honeybees) are on-site to perform pollination services.

The measure is a step in the right direction but doesn’t go far enough!

The new label language only prohibits spraying of pesticides while bees are present and includes only  those chemicals that are acutely toxic upon body contact to bees. Not included on the list are those pesticides that could be toxic when ingested. The largest volume of neonicotinoid use is in seed coatings, which then make their way into plants and create exposure routes through pollen.  This route of exposure is ignored.

The measure is expected to help bumblebees and other native bees, but that’s a big assumption. Growers only need to comply with the measure when contracted bees are known to be present on site.  Applicators are under no obligation to protect native bees in the area.  The EPA says it will take years to figure out if this provision is working!

Sometimes pesticides are more toxic when mixed. Known combinations of chemicals that synergize, or increase toxicity, include neonicotinoids and some fungicides, and insect growth regulators and fungicides. These combinations, though acknowledged by the EPA to be problematic, will not be prohibited by the new labeling proposal.

Says Nothing about Cumulative Exposure from Persistent Neonics

The New York Times recently reported that the The European Academies Science Advisory Council finds that the effect of neonics is “cumulative and irreversible, meaning that repeated sublethal doses will eventually be deadly if a certain threshold is passed.” So restricting use only during bloom period and only for foliar sprays, doesn’t stop the exposure of bees to contaminated pollen and nectar – contamination that stems from pesticides applied outside the bloom period via seed treatment, tree injection, or soil drench.

EPA is seeking comments through August 28 on the new label restrictions. GO HERE and tell the EPA the restrictions don't do enough to help bees!