Giving Thanks for a Community Leader: Lotte Streisinger, 1927-2017

We here at NCAP owe a debt of gratitude to Lotte, but you may not realize that you do, too. Let me introduce you to this artist and community activist. 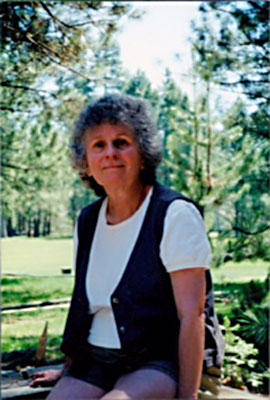 In 1960 the family moved to Eugene, Oregon, when George became a founding member of the Institute of Molecular Biology at the University of Oregon. Activism was a constant in their lives, including involvement in the peace movement and the organization Turn Toward Peace, which worked against the horrors of war that were (and are) inflicted upon our environment.

Turn Toward Peace morphed into the local Eugene Peace Information Center or EPIC, where crafts (including Lotte’s pottery) were sold to support their peace efforts. This initiative grew into the now regionally famous Eugene Saturday Market, a Eugene institution where people buy locally grown produce and handmade crafts from 200 or more vendors, enjoy lunch and music, meet their friends, exchange information and enjoy being part of a vibrant and creative community. Thank you, Lotte.

Lotte’s and George’s relationship with NCAP goes back to our very beginnings. NCAP formed 40 years ago from a coalition of environmental organizations, including CATS, or Citizens Against Toxic Sprays. George, as a biologist and a concerned citizen, served as an expert witness for the 1977 Citizens Against Toxic Sprays lawsuit regarding the aerial spraying of herbicides in the Siuslaw National Forest. That spraying of 2,4,5-T herbicide was blamed for eight miscarriages in the tiny town of Alsea, Oregon and was later banned, thanks to the efforts of CATS and others.

Even closer to home, Lotte noticed dead zones of plants on Spencer Butte, where she and George owned property, and started a petition to end the city’s indiscriminate spraying of pesticides there. The petition was successful. In a time when one might feel powerless against the overwhelming needs of our community and planet, Lotte demonstrated that one person has power. One person, taking the initiative and being persistent, can make a difference. Thank you, Lotte.

George died in 1984, but Lotte continued to be fully engaged in her community and was a steadfast supporter of NCAP, being particularly concerned with the plight of our pollinators. Upon her death, Lotte requested that contributions be made in her name to NCAP, and her many friends responded. She also included NCAP in her will with a generous gift, which will help NCAP to continue this important work into the next 40 years.