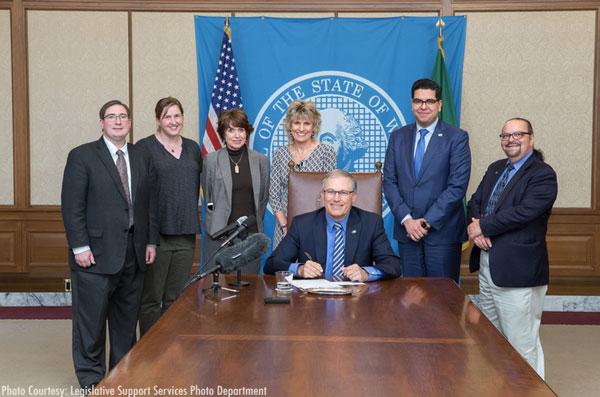 NCAP values a commitment to equity, diversity and inclusion within our organization and with our partners to further our common goals. With this equity lens in mind, we understood the importance of supporting the work of Washington’s Farmworker Coalition and their legislative priorities for 2018.

Despite a short 60-day session in Washington State, the legislature still passed a number of pro-farmworker bills. These bills increase access to health and safety in the workplace and provide better pathways to environmental health and economic and social prosperity for local communities. We are proud to be a part of the coalition that helped pass these bills.

One of the coalition’s priorities this year was to address the hazards of pesticide drift. Signed by Governor Inslee on March 15, E2SSB 6529 creates a pesticide application safety workgroup to develop a report with recommendations for improving the safety of pesticide applications. These recommendations could include pesticide use reporting and notifications to reduce the health impacts of pesticide drift. State agencies, including those running surveillance of pesticide illnesses, have concluded that improved notification would reduce illness rates and accidents. The bill and health impacts of drift were highlighted in a recent Seattle Times Article.

The coalition is lead by Washington State Labor Council Legislative & Policy Director, Eric González Alfaro. Eric was raised on an orchard a few miles outside East Wenatchee, surrounded by farm laborers and their stories of struggle. Eric earned his first paycheck working the fields, planting trees, installing irrigation-lines, thinning and picking apples, and pruning trees; this work he often did before and after school to help his parents make ends meet.

Eric Gonzalez Alfaro had this to say about the recent session and pesticide workshop bill: “As a fellow farm worker, son of immigrant parents who still rely on agricultural sector work, it brings me so much joy to know that I am making a positive difference for today's labor workforce, in their children's lives, and their community's needs. As chair of the Farm Worker Coalition, I help organize and strategize on legislative and policy issues that are important to a network of labor, faith, and community based organizations. This year we helped pass a number of pro-farm worker bills, including one that forms a workgroup to address pesticide application safety.”

We look forward to working with stakeholders to put new practices in place, and we continually strive to build NCAP as an equitable, antiracist and multicultural organization where differences are seen as assets.

Among the other policies the coalition advocated for, and passed, this legislative session were: