Instead of herbicides, some people turn to goats to clear their properties of invasive weeds. Goats can knock down weeds in hard-to-reach places such as steep slopes or heavily overgrown areas where using machinery would be difficult or too damaging. Mike West of Oregon and Craig Madsen of Washington have been putting goats to work in urban and suburban areas.

Portland, Oregon's Catlin Gabel School doesn't disturb its students with the sound of lawn mowers during spring. Instead, careful listeners might just hear the happy sounds of goats munching delicious blackberries and maybe some juicy holly and ivy, too. 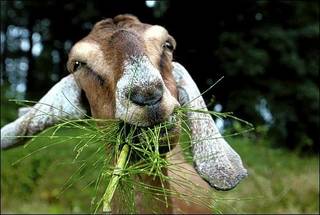 For two and half years, the school's grounds supervisor, Mike West, has herded goats into the two-acre bioswale behind the school to keep invasives under control. West first put six goats in an area overgrown with blackberry. "They did such a good job that we started taking on other areas," he says. That included an old walnut orchard. The school now employs 14 goats to do its land maintenance.

Recently, the hospital next to the school asked to borrow the goats, and they ate about two acres of ivy that was, in spots, knee deep. "They decimated it," says West.

Although West says it doesn't matter which breed of goats he uses, he says, "Those with horns get stuck in the fencing." He cautions people who want to use goats to take care of the horns when they are young.

West also points out the necessity of caring for the goats. Most goats get into trouble when healthy food is scarce and they begin eating weeds and plants they are not usually drawn to. It's essential to inspect the area before letting the goats graze and to use fencing to keep them from wandering into areas they shouldn't eat. That includes areas with native plants, where they should only graze in late fall and winter so they won't eat spring buds. Another way to care for goats is to ensure their diet is supplemented when necessary. If goats are working on a blackberry patch and are down to the canes, its important to supplement with hay for the digestive system.

The labor of using goats is worth it, says West. "If you rent larger pieces of equipment you could do it cheaper but for sensitive areas with native plants, this is the way." But West urges people to seriously consider whether or not they are ready to take care of a goat before getting one. "You really should research the needs of that goat," says West. "You'll need to trim hooves, give wormer shots, know all about what needs to be done." He adds that people should realize "They are not just buying a weed-eater from Home Depot, but an animal that will need care."

A range management specialist for 14 years with the Natural Resource Conservation Service, Craig Madsen learned about people who were using goats for weed control in California and Wyoming and saw a business opportunity in western Washington.

He starting using small groups of 40 to 50 and now maintains 100 does, expecting that number to increase to 280 when they have kids. When his business, Healing Hooves, is hired for a job, Madsen hauls all the goats at one time to the site. Most of his jobs are large and serve city and county agencies. Sometimes, private landowners with two acres or more will hire him.

Like West, he points to the importance of taking care of the goats. Madsen uses portable electric fencing that's 35 inches tall with eight wires. That keeps his goats safe, as does surveying the area for poisonous plants before he goes in. "You have to know your plants," he says, adding that he's seen some locations "where you have to keep them out of certain areas."Madsen says it takes four to five days to have the goats knock back two acres of blackberries. At $800 to $1000 per day, many hire him to do the initial cutting back and then manage the weeds in other ways. He points out that because of the cost of goat labor, the "primary purpose is to do the initial stage cutting down." He adds that is especially true for blackberries, where the goats open up the area so it can be cleared enough to see what's there, and what needs to be done next. He also adds that goats are good for steeper slopes and sensitive areas where heavy equipment is not feasible.