Pesticides and the Climate Crisis

As I look out over the fields of wilted flowers and vegetable crops on my farm, I reflect on the record temperatures we’ve experienced across the Pacific Northwest this summer. Historic heat wave and drought events are becoming more common with the warming of our climate. The Northwest has warmed substantially, nearly 2°F since 1900.1 Higher temperatures create imbalances in natural systems, causing more outbreaks and damage from unwanted pests and weeds. This leads to increased pesticide use as there are more pests to manage.2 Our new Pesticides and the Climate Crisis infographic (below) shows the relationship between pesticide use and climate change, and its effects on environmental decline and human health problems. 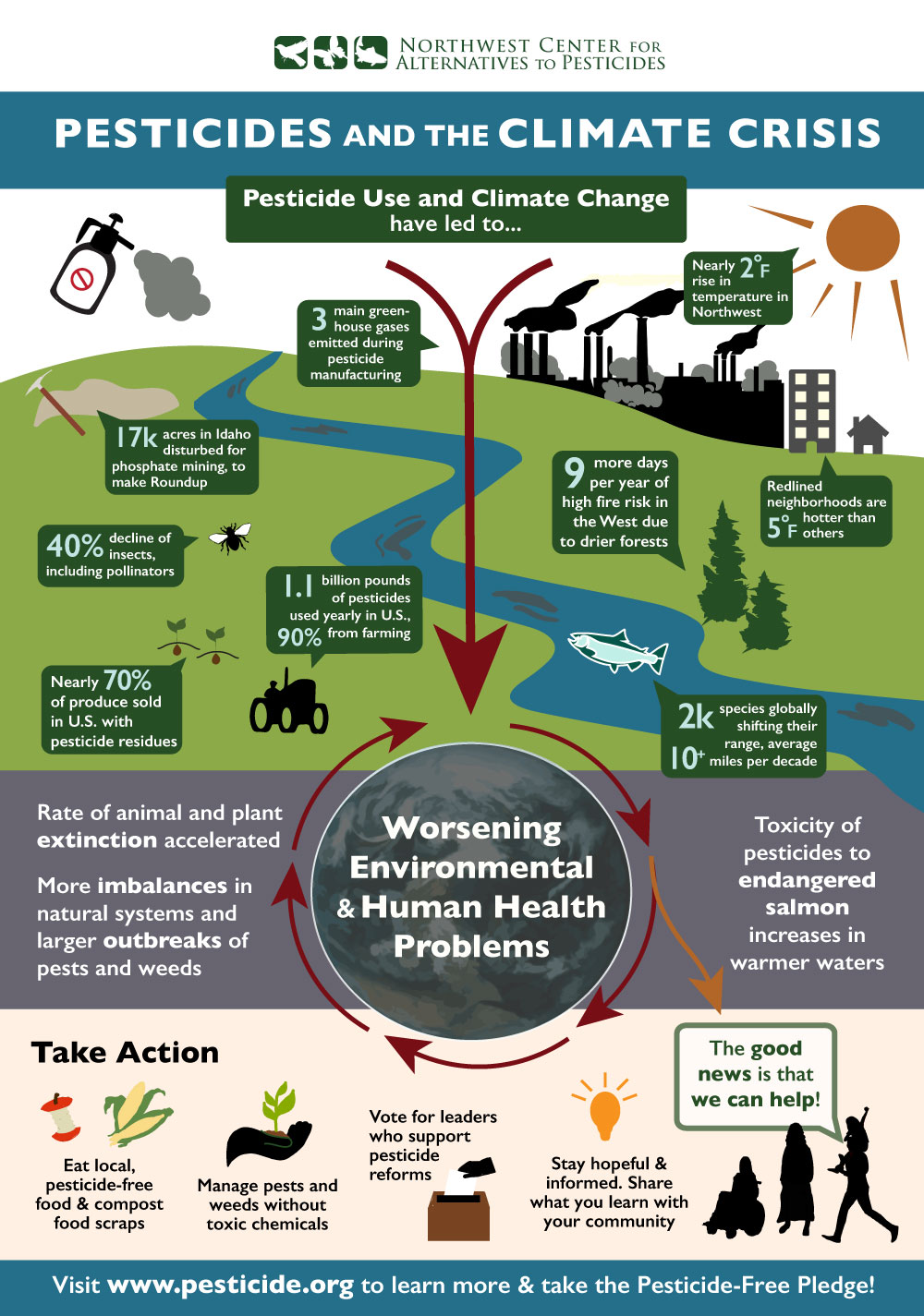 Effects on the Environment & Wildlife

Pesticides impact climate change throughout their manufacture, transport and application. When pesticides are made, three main greenhouse gases are emitted: carbon dioxide, methane and nitrous oxide.3 To create the popular weedkiller Roundup, phosphate ore is mined then refined and produced into glyphosate, its active ingredient. Phosphate mining damages the environment through air and water pollution and the destruction of wildlife habitat. Seventeen thousand acres of land in Idaho have been disturbed due to phosphate mining.4

Additionally, warming waters increases pesticide toxicity. As water temperatures rise, the harms from even small amounts of pesticides in waterways worsens for fish and other aquatic life. For example, the toxicity of glyphosate doubled in bluegill and rainbow trout when the temperature of the water increased from 45 to 63°F.5,6 Scientists have found that, even at low levels, pesticides can cause abnormal sexual development in endangered salmon and harm their swimming ability, growth, development, behavior and reproduction.7

Two thousand species are globally shifting their habitat range by more than 10 miles per decade due to our warming climate.8 Insects found on farms have increased their ability to survive winters and produce more generations of young.9 As these insect numbers grow, farmers have adopted the use of seeds coated with toxic pesticides such as neonicotinoids to manage them. The use of neonicotinoids, which kill insects by blocking nerve impulses, have caused a 40% decline of insects, including pollinators.10

Animals are also migrating as they flee from climate disasters like wildfires.11 Heat waves, influenced by drought and climate change, contribute to the dry conditions that are causing more wildfires.12,13 Between 2000 and 2015, 75% of western U.S. forests experienced an average of nine additional days per year of high fire potential due to warmer temperatures and less humidity.14

According to soil scientists, at current rates of soil destruction (i.e. erosion, desertification, chemical pollution), within 50 years public health will be seriously damaged. Food crops will be less nutritious and lack important minerals. Eventually, we will not have enough fertile topsoil to feed ourselves.11 Human health is at risk the longer that pesticide use and climate change interact.

Over a billion pounds of pesticides are used every year in the U.S., and most of that (90%) is used for farming.15 Nearly 70% of produce sold in the U.S. has pesticide residues.16 Eating these low levels of pesticides over time causes pesticides to accumulate in the body and can lead to a variety of illnesses. These range from short-term effects such as allergies and hypersensitivities to long-term toxic effects including damage to nervous systems, cancer, reproductive disorders and disruption of the immune system.17

Solutions & Hope for the Future

So far here we’ve painted a very dreary picture of what’s to come if pesticide use and climate change continue on their current paths. Achieving real change may feel overwhelming, but there is good news.  We can collectively move toward solutions by making everyday changes to how we live, like what we eat, and by supporting policies for more foods grown without pesticides.

Supporting organic practices, many of them rooted in Indigenous and Black farming knowledge, is important because shifting to climate-resilient farming is a key component of the climate solution. Many small farms in my community are partnering with land trusts to conserve farmland by using regenerative agriculture. Organic practices like no-till and cover cropping reduce carbon dioxide, methane and nitrogen dioxide emissions. They also help microorganisms turn carbon dioxide into oxygen, and work to reverse climate change by rebuilding soil health. Healthy soil, alive with microorganisms, can store more carbon and improve water filtration leading to cleaner water.18

Managing weeds and pests without toxic chemicals can be a challenge, but it is possible. There are many science-based strategies that can reduce your use of pesticides, including: increasing beneficial insect populations to prey on pest insects, flame weeding, mulching, mechanical and manual removal of weeds, and seeking out least-toxic pesticides.

Climate solutions are also applicable at the household level, where food waste can be recycled through the composting process and then reused as growing material. Purchase local, pesticide-free food whenever you can from farmer’s markets, farm stands and through community-supported agriculture (CSA).

At the legislative level, vote for leaders who support organic agriculture and pesticide reforms. Making a bill into law is often a slow process, but we have power through coalitions and advocacy groups. You can even start community petitions around pesticides and the climate crisis and bring them to your state representatives; and be sure to sign on when NCAP has petitions and other action alerts available.

Even though we are in a dire situation, it is important to remain hopeful and informed on the issues. Share what you learn with friends, family and others in your community so we can work together to achieve climate resilience and someday make pesticides a thing of the past!