Protect Workers and Waters from Drift 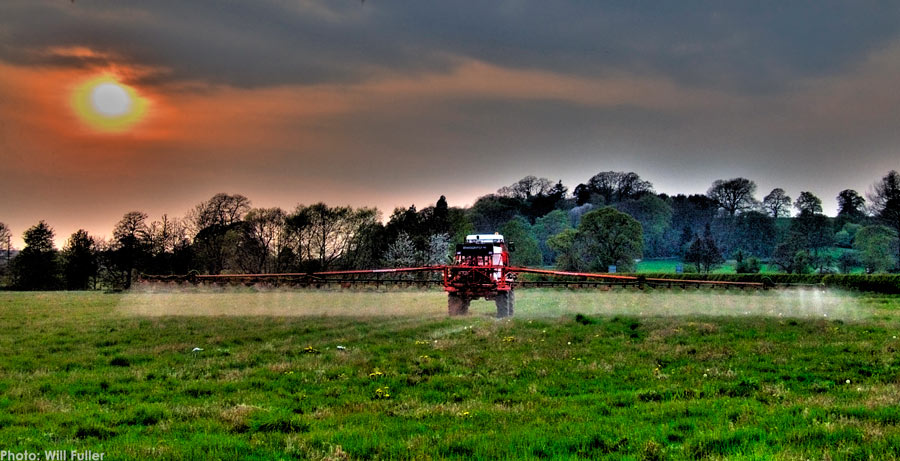 Have you ever seen a billowing cloud of pesticides wafting from a field or a plane overhead? If you live near agricultural land, it's probably a regular sight. Over 899 million pounds of pesticide (roughly $9,055 million dollars) are used at the producer level in agriculture in the U.S. every year.[1]

These pesticides have a huge detrimental impact on our economic and public health. Pesticides are proven or suspected to exert neurological, psychiatric, developmental, hormonal, reproductive, and/or carcinogenic effects.[2] So it goes without saying that efforts should be taken to protect neighboring properties, including schools and adjacent farms and housing, from pesticide drift. Socially just worker protection regulation is a basic element of agricultural sustainability, along with environmental stewardship and economic viability. Recently, NCAP has been working on legislation and rule changes that address drift in Oregon and Washington.

Pesticides, including herbicides, insecticides and other synthetic chemicals, can drift off of the fields where they are being applied, landing on nearby crops, workers, housing and schools. In 2017, a weed killer called dicamba damaged more than 3.6 million acres of soybean crops, or about 4 percent of all soybeans planted in the United States and damaged other cash crops, as well as adjacent fields and forests (the extent of the damage from drift is unknown). The Environmental Protection Agency (EPA) tallied 2,708 complaints to state agriculture officials about dicamba crop damage in 2017, but estimated that complaints could be five times greater due to under-reporting.[3]

Drift is not legal but it occurs as a matter of course, even when following best practice models and label directions. In practice, drift is very difficult to avoid. A 2002 aerial drift study conducted by Washington state researchers found “spray drift occurring despite adherence to general precautionary pesticide application guidelines.” This research analyzed a routinely scheduled aerial organophosphorus pesticide application of methamidophos in central Washington and tested the crops and surrounding rural agricultural community.[4]

A national study of drift found agricultural workers were the most at risk, and soil applications with fumigants were responsible for the largest percentage (45%) of cases. Aerial applications accounted for 24% of cases. Common factors contributing to drift cases included weather conditions, improper seal of the fumigation site and applicator carelessness near non-target areas.[5]

The federal government uses standardized drift modeling in its risk assessments. Models used by the U.S. government to estimate drift (Agdrift) yield estimated drift distances from aerial and airblast spraying in the neighborhood of 300 feet routinely. For example, the EPA’s recently completed biological evaluation for chlorpyrifos estimated 3-6% loss of pesticide from aerial application as far as 300 feet away.[6] Another recently completed EPA risk assessment for imidacloprid estimates the drift fraction at 25 feet from the spray to be approximately 3% and 1.5% for ground and air-blast applications, respectively.[7]

According to departmental reports from Washington, drift is the most common source of acute illness related to agricultural use of pesticides. During 2005-2012, farm workers suffered 66% of all illnesses from drift, and 56% of these illnesses were the result of off-target pesticide drift. It is widely believed that drift incidents are significantly underreported due to worker fears concerning retaliation and intimidation.[8]

How do people protect themselves?

In order for people to protect themselves, two main elements are important. First, people need to know about the spraying in advance, so that they can leave the area during and shortly after the spray. Second, we need adequate buffers around sensitive areas, since even with advanced notification schools, housing and streams need protection.

NCAP is currently working on both of these strategies. In Oregon, OSHA has proposed to decline to adopt portions of the recent federal rule strengthening worker protections for agriculture and instead implement a rule to allow workers to ‘shelter in place’ during a pesticide application.  There are better alternatives, as well as less-toxic pesticides and sustainable farming practices that would reduce exposure.  Organizations that work on behalf of farmworkers and their communities (including Pineros Campesinos del Noroeste (PCUN), Mujeres Luchadores Progresistas, FHDC, Latinos Unidos Siempre, SEIU, CBTU Trade Union, and Mano a Mano Family Center) as well as other allies want stronger - not weaker - protections.

NCAP joined these organizations in asking for a 300-ft. buffer zone around worker housing for pesticide spraying in agricultural fields and orchards in a comment letter, and we are circulating a  supporter petition to OSHA. Such a provision would help prevent direct pesticide exposure for farmworkers and their families far better than either the federal AEZ provision or the OSHA proposal. We value solidarity with these allies, as we work together to accomplish a shared goal.

In Washington, we worked in collaboration with the Farm Worker Coalition to support Substitute Senate Bill 6529 (SSB 6529). Originally a bill to require pesticide use reporting and notification, the substitute bill calls for a stakeholder workgroup to be formed to propose a rule change around these two issues. As a matter of good business practice, application information that is already required to be recorded should be shared with the Department of Health. The second part of the bill would require advanced notification to adjacent properties, including a process for school notification and signage. SSB 6529 would provide important and needed protections for community and environmental health, and we are proud to be partners in this work!

It’s clear that drift happens, and the potential for drift is markedly higher the closer to the application site. Prevention from harm should be the highest priority. We look forward to continuing to work along with concerned stakeholders, as we share the common goal of protecting community health and safeguarding our schools, farmworkers and neighbors.

Support the efforts in Oregon: Sign the petition here!

Email using this link: https://www.governor.wa.gov/contact/contact/send-gov-inslee-e-message
Or call this number: 360-902-4111

Please support SSB 6529 and efforts to require notification and pesticide use reporting.  We need to protect families, workers and schools from drift, and applicators should practice good record keeping and report their use of harmful materials. Environmental and community health is important to me. Every Washingtonian is accumulating a body burden of toxic chemicals associated with negative health impacts. I urge you to support efforts to establish stronger environmental standards and protections for farmworkers and their families.

What should you do if you are drifted on: See our FAQ on our website