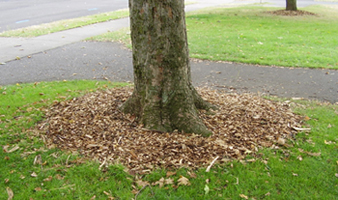 Some people like the aesthetic of tree wells in their landscaping. The tidy circle around the tree provides a nice contrast to the surrounding grass and protects exposed trees roots from damage from lawnmower blades.

Here are some insights and successful weed control strategies gleaned from parks maintenance staff in Idaho, Washington, Oregon and California. Of course, what works in one location might not work in another location because of differences in climate, soil, and other factors, but their ideas can be a great starting point for the home landscape.

Mulching tree wells is as much about maintaining healthy trees as suppressing weeds. Mulch retains moisture for tree roots, keeps light from reaching weeds below, and is also an inhospitable substrate for weed seeds that land on top.

The diameter of the mulched area surrounding the tree should extend as far as roots are visible. Mulch should not, however, be piled on top of exposed roots because moisture trapped by the mulch provides an ideal environment for root rot (fungus).

The visual boundary created, as well as the additional space between the tree and the turf, helps protect the tree and roots from damage by mower blades. Damaged roots and bark make trees more susceptible to disease.

Older trees with a large, dense canopy that blocks out light may not have any weeds surrounding them if they are not irrigated. The areas under conifers are often dry and compacted and naturally inhospitable to weeds.

Many parks maintenance employees use bark mulch. For those who have tried both wood chips and bark mulch, however, wood chips are the hands-down winner for weed control.

Bark mulch can be ineffective because it can be a barrier to water intended for tree roots. It also has finer particles that break down more rapidly and can provide ideal conditions for the development of a "mat" of mycorrhizal fungi that is impermeable to water or air. If bare and hard, the mat is less hospitable to weeds, but dirt and other material may soon cover the surface, which retains nutrients and water that benefit weeds, not the tree. 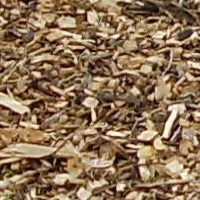 Weeds will generally not grow in wood chips, which are larger in size and break down much more slowly than bark mulch fibers. Wood chips have bigger air pockets than bark mulch fibers, resulting in poorer weed seed-to-soil contact. They can also provide excellent long-term weed suppression, given the right conditions and management of the area.

The amount of irrigation around the tree can affect the level of weed growth. The more irrigated the surrounding turf, the more likely weeds are to grow in the tree well. Mulching with wood chips can suppress weeds effectively and help to retain water for the tree while allowing the tree's roots to grow deep.

Taking care not to mulch too thickly is important. Mulching too thickly, even with wood chip mulch, around a well-irrigated young tree can cause the roots to grow shallowly in the wet mulch rather than growing deeper below. This is true more so with frequent light irrigations than infrequent, deep irrigations.

Mulch should not be piled up around the trunk because contact with the bark can provide an ideal moist environment for various disease-causing fungi to thrive. Instead, mulch should taper down to soil level right at the tree trunk.

Wood chips can be effective at smothering pre-existing weed seeds and preventing new seeds from germinating when they are spread at least two deep and five to ten feet in diameter around mid-sized and larger trees, or three to five feet in diameter around small trees. To maintain healthy root zones, mulch should be replaced rather than just adding more. One park's rule of thumb is to replace it every year and a half. 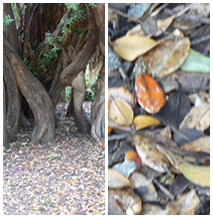 Wood chips may be available from your city or county public works or waste management departments. Other possibilities include arborists, tree service companies, utility companies, and yard waste recycling businesses. If your property generates a lot of tree cuttings, consider buying a chipper or going in with neighbors on a rental. 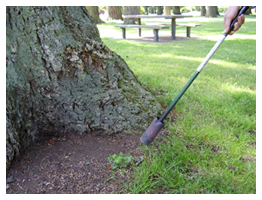 Flaming using a propane-powered flame weeder can be effective for weed removal in tree wells, although care should be taken to avoid flaming exposed tree roots. Flamers should only be used during the wet season in wet climates to avoid causing a fire. Flamers should not be used around wood chips or anything else that's flammable and should not be used in areas where fire danger is high and open flames are banned.

The most appropriate type of flamer for tree wells is one with a narrow nozzle that shoots a flame from the end, such as the Red Dragon. With the nozzle aimed at a weed, an invisible column of air that extends beyond the flame reaches 2000° F, searing, rather than burning, the weeds. From the weeds' perspective, searing is a slower assault than cutting or burning so they are less likely to send a signal to the roots to re-grow. The seared weeds will turn brown within one day during hot weather and two to three days during cooler weather. Be aware, however, that although flaming is effective against broadleaf weeds, it can actually stimulate grasses to grow.

Flaming can also be quick, especially when used against young weeds. For a row of weeds one to four inches tall, the nozzle can be passed over the weeds at a rate of about one foot per second. Weeds above four inches tall require longer treatment. More details about flaming are available in NCAP's article on flame weeding.

Hand removal is an alternative to flaming when conditions are dry. A stirrup hoe, also known as a hula hoe, may be used to remove weeds from tree wells under large trees, but should not be used in tree wells of young trees in order to avoid damaging young tree roots. Hand pulling, rather than hoeing, can disturb the soil if the tree well is not mulched, possibly stimulating new weed seeds to germinate. Another drawback of hand-pulling is that it requires crouching close to the tree, which can result in soil compaction.

Herbicides that contain strong vinegar (acetic acid) or clove oil work best on young weeds in strong sunlight and hot weather, and may need reapplication. A California park manager had success using them on the warmest, sunniest days, but an Oregon parks manager found that clove oil and acetic acid-based products were not as effective in controlling weeds as wood chip mulching and using a hula hoe every three to four weeks. He noted that the strong smell of clove oil made staff feel nauseous and alarmed citizens. He also recounted an accident with a strong acetic acid product that corroded the bottom seal on his backpack sprayer, spilling the product onto his pants. Acetic acid concentrations above 11% can burn skin and cause permanent eye damage. Another NCAP article provides more detailed information about vinegar in herbicides.

Two parks reported that fabric weed barriers in tree wells got damaged or were easily exposed and looked unattractive. Weeds can still be a problem as most weed seeds enter and take hold on the surface, not underneath the fabric barrier.